Verizon got it first (for once), but now it's time for Samsung Galaxy S4 owners on Sprint to get their Android 4.3 update on. The over-the-air download should be disseminating today, though we've yet to see confirmation from Sprint itself. Assuming that it is indeed going out, the update comes right on schedule, according to a leaked Samsung document. 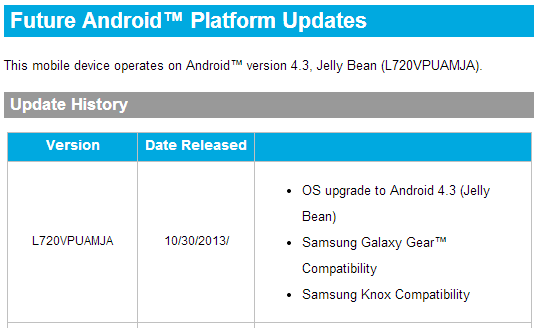 In addition to the standard Android 4.3 features, the OTA download (L720VPUAMJA) delivers compatibility with the Galaxy Gear smartwatch and Samsung's Knox encryption system. 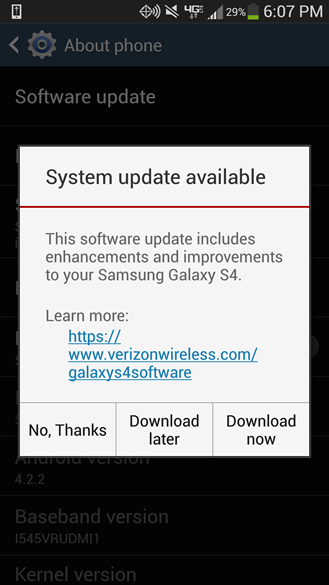 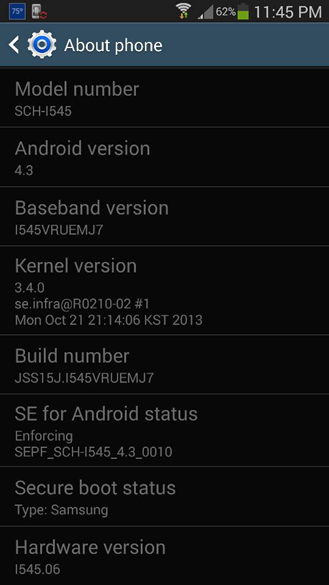 Samsung has added details about the upcoming I545VRUEMJ7 software update that will, among other things, make the device compatible with the Galaxy Gear. That means anyone who ran out and purchased the watch before discovering that it was only compatible with the Note 3 can now breathe a bit easier (I'm sure at least one person did that, right?).

By all accounts, the Galaxy Gear isn't doing spectacularly well. Samsung is still busy adding support for its smart watch to devices other than the Note 3, and the device itself is not without its foibles. Still, your choices are limited when it comes to smart watches, so you might as well save 20 bucks.

The Galaxy Gear has a 1.63-inch AMOLED screen with support for catching your Android notifications and telling you what's up (sometimes) without looking at the phone.

If you've got a Samsung phone from before the Note 3 and you're on an American carrier, you're probably wondering where your Android 4.3 update is already. The leaked schedule below has been verified to Android Police by two reliable sources, and shows when the 4.3 update is scheduled for the Galaxy S III, Galaxy S4, Galaxy S4 Active, and Galaxy Note II on AT&T, Verizon, Sprint, and T-Mobile. This update will also add support for the Galaxy Gear to these devices.

Out of the gate, the Samsung Galaxy Gear has made for the tough sell. It's hard enough to justify dropping $299 on a watch, but it's even more difficult to shell out that much on one that only pairs with a single device. Customers who don't want the Galaxy Note 3 or aren't ready to cut the cord on their current handsets have thus far been out of luck. Of course, Samsung has been upfront from the beginning that it planned to release support for slightly older Galaxy devices down the road.

Feedly has replaced the much-loved Google Reader for quite a few of you, so we tend to pay attention when a new version hits the Play Store. Today the Android app has been updated to version 17 with a laundry list of improvements and tweaks. There's nothing game-changing in there (though arguably the "300% faster start time" is a big deal), but it does include "support for Android Kitkat." No, the developers are not elaborating on that.

If you've been waiting for the newest and shiniest Samsung tech to get a bit of Magenta branding, wait no longer: the Galaxy Note 3 is now available from T-Mobile.com. The Galaxy Gear should be on sale, but at the time of writing the online store pages for the watch are returning errors. T-Mobile retail stores should be offering both devices starting today. The Galaxy Note 3 is $708 at full price, $199 plus a $21 monthly charge over 24 months, or $29.50 per month with zero down (if you qualify).

These devices haven't launched in the US yet, but these files enable developers and open source enthusiasts living stateside to play around with things before anyone else, in a sense.