Root addicts and ROM flashers on Verizon, prepare to lose it. According to a short question and answer session with Motorola Mobility's VP of Product Management Punit Soni, there will be no Developer Edition of the swanky second-gen Moto X for Verizon. Google+ user Shane Barone asked Mr. Soni about the availability of a developer edition and got this apologetic reply: 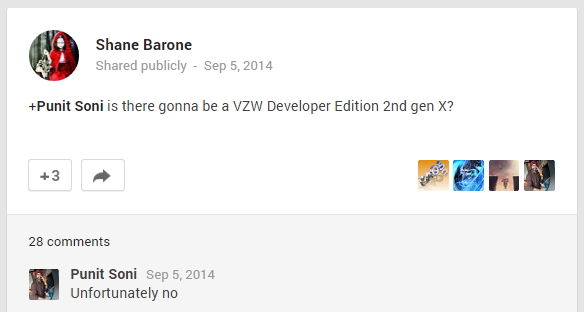 Developer Editions are special carrier editions of phones sold without a contract and with an unlockable bootloader, made available for customers on carriers that permanently lock bootloaders as a matter of course.

Update: Turns out the app is only compatible with LG Google TV's for the time being (meaning no Google TV set top boxes are compatible at this time). That's lame.

Remember Google TV? You know, the Google-developed set top box running an Android variant that never managed to catch on? Well, if you're one of the small but dedicated users of the most neglected streaming device around, there's reason to celebrate: Amazon's Instant Video app, previously "exclusive" to the Kindle Fire, iPad, Roku, TiVo, Blu-ray players, various connected TVs, and just about everything except standard Android devices, is available on Google Play from your Google TV.