Apparently there are a whole slew of pissed off users because Google decided that the Nexus One will not be getting updated to Ice Cream Sandwich. As a result, an infographic was made to represent the fact that Apple can support its four devices better than manufacturers support their ump-teen Android devices. The infographic compares the all the iPhones of the past three years (so it excludes the 4S) to most Android devices of the same timeframe.

It looks like Facebook is continuing the juggling act with their Android app, as they have fixed a few bugs and added a few new features with the latest update. Here, I've got the short list for you:

Not listed: the force close feature that kicks in all the damn time.

If you’ve been an Android Police fan for a while, you may recognize my name from some of my past posts. Beyond that, I was mostly active behind the scenes until I dropped this little bomb when I departed earlier this year.

The reaction to that article was pretty much what I expected - it was divisive and the conversation surrounding it was often heated. Ultimately, though, my goal was accomplished: people were talking about the problems surrounding Android and software updates.

A recent study by William Powers of Baird Research has revealed that a whopping 86% of developers think that Android fragmentation is a problem. While only 24% of devs described it as a "huge problem," it doesn't discredit the fact that the overall percentage was so outrageous. 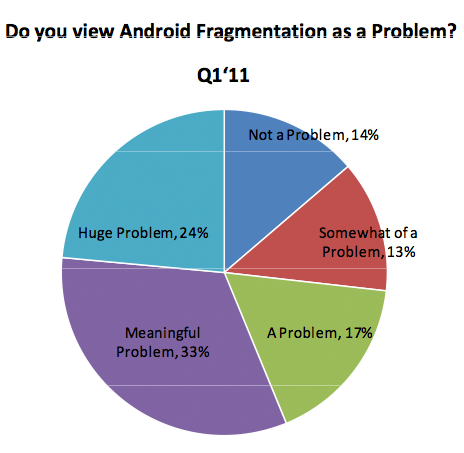 Venture capitalist Fred Wilson still recommends developers write for Android before iOS, as he predicts that iPhone vs. Android is just a remake of Macintosh vs.

For everything that we love about Android – openness, customization, large selection of devices, etc. – there are things that we hate about it, too, like fragmentation and manufacturers pre-loading devices with crapware and (some) custom UIs. It seems, though, that Google is looking to change all of that. Insiders from companies “in the Android ecosystem” have told Businessweek that Google is starting to crack down on changes that manufacturers are allowed to make to Android.

I think it's safe to say that Android is the best thing to happen to smartphones since the iPhone (though, I'll admit, I may be a wee bit biased). Without a doubt, the massive success of the operating system is due in large part to its openness; the ability for devices to share fundamental code, while still allowing for an amazing amount of customization, has provided something for consumers, carriers, and manufacturers that Apple would never match.

Before I go onward with this rant, I want to make it crystal clear that I have nothing personally against the developer who ported CyanogenMod 7 to the Galaxy Tab, people like him (or her, of course) are part of the reason I love Android.