While the Play Store is generally the more accepting and pervasive of the two big mobile application platforms, it still needs a fair amount of moderation to keep out the riff-raff. Malware, spyware, annoying apps that put things like [Free Download] in the title, it's all got to go. But it looks like Google is getting more aggressive in enforcing its more general developer terms, especially when it comes to payments. Case in point: Language Transfer. When smartwatches first hit the market several years ago, I immediately hopped on board. As an avid lover of watches, I found myself very interested in the concept of wearing a timepiece that also doubled as a notification mirror for my phone. At the time, I worked in jobs where phone use was either discouraged or outright prohibited, whether by policy or the frantic pace of the position. But unfortunately for me, I have a compulsion to know what's going on with my phone at any and all times — I can't just ignore my phone going off. So smartwatches offered me a chance to keep my phone in my pocket, but still be kept apprised of my incoming notifications.

Technically speaking, Android is open-source. This means anyone can look at the operating system's code, or change it - this is how OEMs like HTC and Samsung add their own tweaks. That openness has often been a rallying cry for hardcore Android enthusiasts. Why use a closed platform like iOS, when you can have a free and open-source platform?

But even from the beginning, there were components of Android that were closed-source. The Gmail app, Maps, Google Talk, and the Play Store were some of the earliest examples. To combat the always-present fragmentation of Android, Google offers many APIs through the Play Services Framework. My first computer was an old laptop with a dead battery and a dial-up modem. It ran Windows XP, but I didn't have the money to buy expensive software like Microsoft Office or PhotoShop. I discovered OpenOffice.org, AbiWord, and GIMP. I used Firefox, Thunderbird, and Pidgin.

Back then free cloud services weren't yet around, and I didn't have a strong enough Internet connection even if they were. Without an understanding of what open source software was, such applications gradually formed the majority of what I used. When I later went to college, I embraced Linux, and my appreciation for open source software grew.

One of the key aspects of Android is its open-source nature, and one of the biggest players in the open-source community is GitHub. What better way to tie that all together than for GitHub to release an Android app? Probably none.

Clearly GitHub subscribes to a similar school of thought, as it has just released a swish-looking application to the Play store, offering a bunch of nifty features like issue tracking, following your friends' projects, and discussing code with the community. 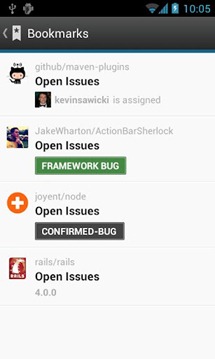 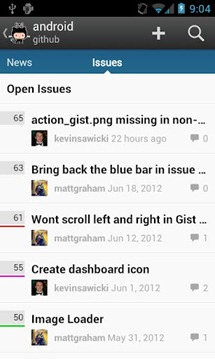 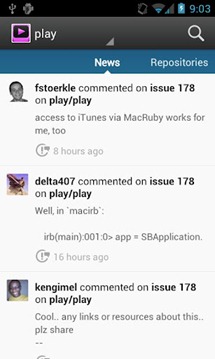 As you might expect, the entire application is open-source, and GitHub has invited users to take a look through their app's repository to see exactly how the application was built.