In case you've been living under a rock for the last month - or somewhere that isn't AMERICA, which for the purposes of American Football, is basically the same thing - the Super Bowl is coming up on Sunday. Surprisingly, the big game was and is one of the only major sporting events that just about everyone can access for free, both on over-the-air television and online (at least on desktop browsers).

There's a new way to keep up on the goings on in the world of soccer (or football, to most people in the world). The official FIFA app has hit Google Play with all the news and stats you could ever want. 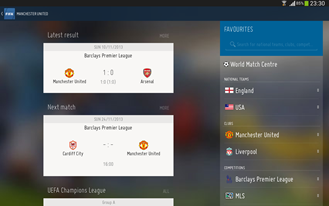 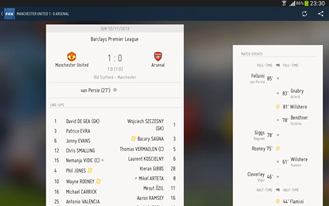 We know some of you have been dying to get your hands on a mobile version of FIFA 14, and you probably hated to find out that the game was now available, just not in your country. When we first posted earlier today, this game was only out in several countries. Well, patient soccer fans, it's time to check the Play Store again. EA has taken an awkward approach to rolling out this title, but it should now be available in most countries.

If you've been waiting for Electronic Arts to release the latest version of its monster soccer franchise FIFA for Android... well, you'll probably have to keep waiting. FIFA 14 is available in the Play Store, but the only place that we've confirmed it can actually be downloaded is in Romania (and possibly Singapore). There's no sign of a North American release, which usually comes in a separate listing.

The new FIFA 14 includes 33 football leagues and over 600 teams, all with licensed player names and stats.

In case you haven't noticed, fantasy sports is kind of a big deal. You can't get through a single NFL broadcast without being bombarded by fantasy-flavored reports, analysis, and even advertising (including this commercial being shown every single break). The link for "Fantasy" is the first thing on NFL.com - not tickets, not NFL Network subscriptions, not overpriced jerseys. In that context, the official NFL Fantasy App Advisor makes a lot more sense.

It's football season in America, and that means just one thing: a lot of very rich people are going to spend the next five months getting slightly richer. Oh, and a lot of people are going to have fun watching sports. Or playing them, as the case may be: Madden NFL 25 just landed in the Play Store. That's 25 as in the 25th anniversary of the first Madden video game - this year's release would otherwise be called Madden 2013 or similar. 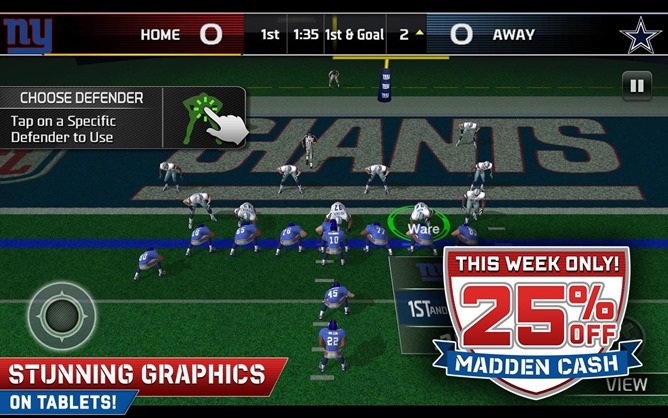 Madden 25 mixes things up with a new control system, offering either the classic console-style joystick controls or new swipe controls.

It's football time in America, and you know what that means: a mad rush to get all the infrastructure updated in time for opening day. The official NFL Mobile app is getting its first major update since the publisher was switched back in August. A nice list of new features is included, most notably the addition of our neighbors to the north in Canada. Everyone in Canada should be able to access the app with its scores and news, but only Bell Mobile TV subscribers will be able to watch live games.

Last week the NFL released a shiny new version of its official Android app. There were some nice additions, like a much-improved interface and some team tracking features. Oh, and it unceremoniously kicked rooted users to the bench, not even allowing them to check scores. Considering that at least some of them had paid Verizon or a cable provider for access to live streaming video, they were justifiably upset. 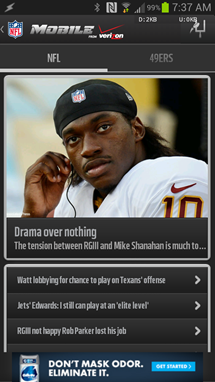 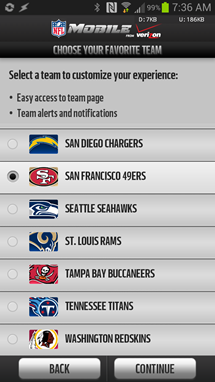 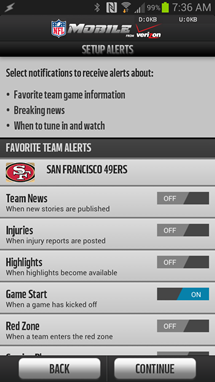 It looks like the update to version 8.1.1 has quietly removed the root check, allowing power users to access the app without issue.

Hey, NFL Mobile developers. We need to talk. I'm glad you decided to drop the yearly re-title from your app - that's one less thing you'll have to do every summer. But the number after three is four. Four. The one right before five. Now I know decimals can be tricky, but I honestly have no idea what caused you to jump from app version 3.7 to 8.0.26 - next time, show your work.

Just two more months, football fans, and your long wait will be over. Many NFL fans use the summer months to prepare their fantasy football teams and leagues, in the gentleman jock's alternative to Dungeons and Dragons. CBS has its own fantasy service (just like ESPN, Yahoo, the NFL itself, and starting in 2014, the official Android Police Fantasy Football Service) that was marked by an impressively awful Android app, lazily ported from the iOS version.