Your phone is a powerhouse compared to even the most impressive supercomputers from a few decades ago, and most of the time that power isn't being put to good use. The [email protected] project is all about harnessing unused CPU cycles from multiple devices and machines across the world in order to solve big medical problems. The Android app has been available for a few years, but it's now officially open source.

There are millions of smartphones out there with the processing power to get real work done, but they spend most of their time idle. That's what you want for battery life, of course, but [email protected] offers a way to contribute some of those unused cycles for the greater good while your phone is on the charger. [insert Snapdragon 810 overheating joke here] [email protected] has existed on computers for years, but Sony brought it to Android a while back. The new 2.0 version makes the following changes.

Sony's [email protected] app turns your Android device into a weapon in the war against diseases such as Alzheimer's and Parkinson's by contributing your spare computing power to research. It entered the Play Store in early January as a beta exclusively available to certain Xperia phones. Now Sony is expanding the experience to other hardware, including devices running Android Lollipop.

Here you can see [email protected] running on my HTC One M7, a non-Sony device with the latest version of Android. 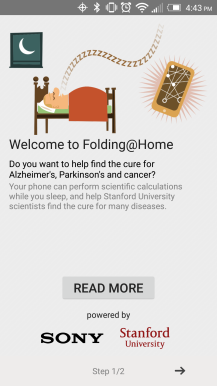 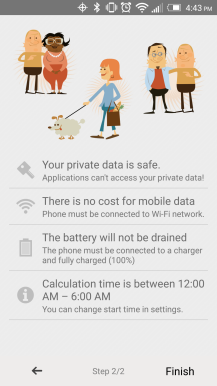 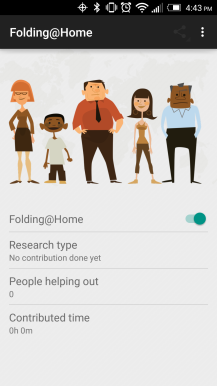 While it's nice to see [email protected] opened up, the app is still incompatible with tablets and slightly older devices such as the Nexus 4, the Galaxy Nexus, and the Galaxy Note II (the Nexus 5 and the Note 3 are supported though).

[email protected], at first glance, looks like a trendy name for a blog about mastering origami, but it's actually an initiative that could some day help crack the secrets behind certain life-threatening illnesses. Folding refers to the way in which proteins bend themselves into various shapes, forming the building blocks for our bones, skin, and everything in between.

Sometimes proteins don't fold correctly, leading to diseases like Alzheimer’s and Parkinson's. Unfortunately, the process occurs so quickly that it's difficult for scientists to observe. A lab led by Dr Vijay Pande at Stanford University developed a way to slow the process down in a simulator, but it requires a good deal of processing power. Instead