Coin was one of the first companies to try its hand at combining all those credit cards you haul around into a single smart card. There have been others since, but some haven't even shipped. Coin eventually sold over 250,000 units, but this is the end of the road. Coin's wearable payment platform has been acquired by Fitbit, and it will no longer sell its current smart payment device. I have had a Fitbit One for 3 years now and I couldn't be happier with that purchase or how easy it is to hook on my bra and leave it on all day. But what if you don't have a Fitbit and want to check the platform to see if it could work for you? Or what if your Fitbit stops working for some reason and you're awaiting a replacement, or you're switching from an old Fitbit to a newer model, or your Fitbit's battery dies, or you simply forget it at home? Would you want to lose the activity data from those hours or days? Fitbit is crushing the activity tracking game. Just absolutely crushing it. And when a company is winning this hard, it doesn't like the idea of losing. Bigger competitors keep trying to eat its lunch. Other rivals keep trying to make something prettier. Smartphone makers think they should get in on this action. But Fitbit doesn't sweat the competition. It only sweats from all the jogging it's doing back and forth to the bank.

Fitbit has found success by releasing a bunch of products, so it's keeping that up. The company's newest thing you will soon be able to strap to your wrist is the Fitbit Alta. When it comes to fitness bands, Fitbit is the name to beat. But with new smartwatches from Apple, Google, Microsoft, and Pebble all touting some degree of activity tracking, the company knows the competition comes in more forms than the bracelets Misfit and Jawbone strap onto the wrists of athletic people.

Fitbit has experimented with watch-like devices for a couple years, starting with the Force, which was ultimately recalled. Fitbit replaced that product with the largely identical Charge. Now it's making a smartwatch that looks less like an activity tracker and more like the Asus Zenwatch or the Apple Watch. I had my eyes on Amiigo the moment it was mentioned here on Android Police back in January 2013. The promised features seemed like everything I wanted in an all-day sleep and activity tracker, especially with its waterproof design and swimming capability. See, runners and cyclists have it easy: there are dozens if not hundreds of gadgets they have been able to use for the past years to track their workouts. But swimmers, well, let's just say the choice has always been limited and it was even more so in 2013 when you wanted a smart tracker that synced with Android.

You can make a lot of money producing fitness bracelets. Fitbit has gone public, and it has thoroughly exceeded expectations on its first day on the stock market. The San Francisco-based company opened and closed today with shares priced roughly 50% above its initial public offering of $20. Fitbit currently sits at $29.68 a share, leaving it with a value of over $6 billion.

This is no small feat for a company that released the Flex in 2013 and has followed up with only a few variations since then (including one that was later recalled). Fitbit continues to hold on to more of the activity tracking market than any of its competitors, including the likes of Jawbone, Samsung, Microsoft, Google, and Apple. I knew the Indiegogo origin story of Misfit — which translated into skepticism in my mind —  and I'd read about its Shine tracker and simpler/cheaper Flash version, but I wasn't completely convinced by the quality nor the premise of the brand.

Picking a wearable to buy can be a daunting task. While the choice was quite limited a few years ago, with mostly just Fitbit, Jawbone, and Nike on the scene, the field has widened considerably since then. Withings, Misfit, Pebble, and various other companies have entered the market and offer strikingly similar albeit slightly different approaches to wearable gear. That's not to mention the various choices offered by each company alone — Fitbit for example has the One, Charge, Charge HR, and Surge to pick from. So how would you decide which one suits you best, especially if you still haven't plunged into the wearable segment yet?

Towards the end of March, Fitbit announced the Charge HR and Surge, new additions to its activity-tracking family. The Charge HR is an enhanced version of the Charge, just with a heart rate monitor added on (clever). The Surge is the Cadillac version that comes with a giant, black and white touch screen. The former goes for $149.99, while the latter goes for a hundred bucks more. Both are now shipping in North America, which a global release soon to follow. 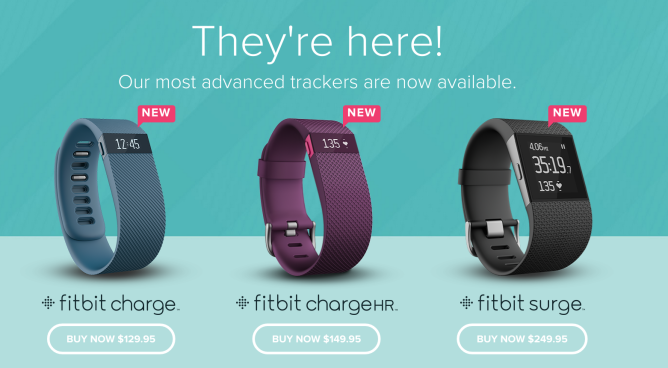 Fitbit is also adding a few enhancements to its fitness platform. Soon owners will be able to link up to five trackers to a single account.

After reports of skin rashes pushed Fitbit to recall its Force activity tracker at the beginning of this year, the company is now ready to bring the product's replacement to market. It's called the Charge, and it's joined by two other fitness bracelets packing more features and a higher cost.

The Charge comes with largely the same look and capabilities as the Force it replaces, providing the ability to track steps, follow sleep patterns, count floors climbed, see calories burned, and know who's calling. That's not to say that things are entirely the same. The Charge can track sleep automatically, which is a significant improvement over initiating the process manually (assuming it's reliable).