Existing users of Springpad should still feel right at home in the app, but will notice a more streamlined approach to accessing their "Springs," which also includes Springs from followed users as well.

If you're an Evernote user, you might want to head over to the Play Store and check for updates. The latest version of the popular note taking app just landed, and it's packing some pretty neat features for both non-premium and premium users.

One of the biggest changes in the new version is the introduction of Page Camera, which take photos of physical documents and digitize them in your notebooks. The Android app is now also compatible with the Smart Notebook by Moleskine, which has specially formatted paper making it easy to bring your notes into the digital world.

The problem with relying on cloud services is that they are prime targets for hackers. Earlier today, popular note-storing service Evernote acknowledged that it had detected "suspicious activity" on the network. In its blog post, Evernote specified that the intruder(s) had only gained access to account details, including usernames, email addresses, and encrypted passwords. The announcement further clarified that passwords are protected with one-way encryption, a process where a password is first salted and then hashed to make decryption extraordinarily difficult.

Skitch, a popular annotation and sharing app, received an update to version 2.0 today with a redesigned interface, a handful of useful markup tools, and improved Evernote integration.

For those unaware, Skitch is an app that allows users to "communicate visually with friends, co-workers, or anyone." Essentially, it can draw in resources like notes, photos, screenshots, or maps, and then add markup to convey ideas or highlight important aspects of the document for later reference or sharing.

If you've ever needed to jot down a quick note on the go, I hope you used Evernote to do it. The Evernote service, and the accompanying app, make it easy to keep all your notes in the cloud. This app has long had great features like audio notes, notebook categorization, and tagging. Now Evernote is getting a little more awesome for anyone running Jelly Bean. 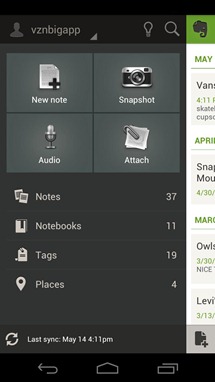 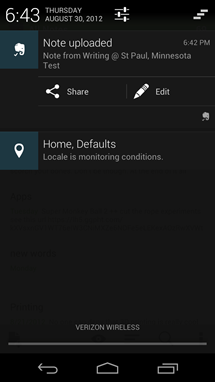 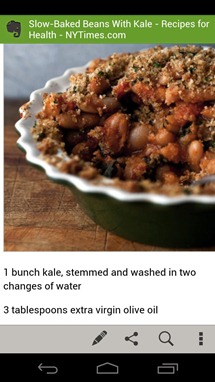 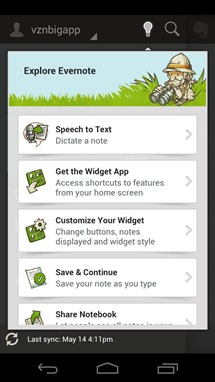 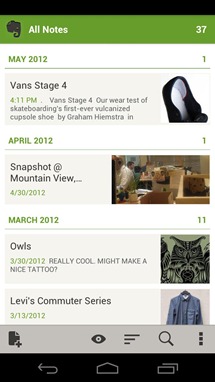 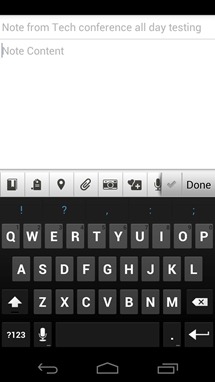 Android 4.1 supports expanded notifications so you can trigger actions right from the drop down.

I love Evernote. In fact, I don't go a single day without using it. And today, I love it even more. The Evernote Team just pushed an update to the Android app that makes it even more useful on tablets by introducing an all-new user interface.

Here's what I love about it: the old interface was good. It was functional and intuitive, I had no complaints. But the new interface is better and more intuitive.

While after a discussion we at Android Police were unable to determine exactly why Evernote couldn't implement the functionality of its newest Android app, Food, into the existing Evernote app, we were able to settle on one thing: people take too many pictures of the things they eat. Evernote Food wants you to do this more, though, and has a veritable cornucopia of tools at your disposal to make you the ultimate delicacy documentarian.

Some people are simply amazing with remembering faces. I'm not one of them. Evernote, creator of the widely-renowned note-taking app of the same name, has set out to help me with Evernote Hello. I guess you guys can use the app too. The app is a visual contact list that puts your contacts' faces front and center. It even allows you to take down notes of how you met someone, and tie notes in your Evernote account to your contacts' encounters.

The world of the future has some pretty great products to keep productive. Things like Google Calendar, Dropbox, Evernote, and a myriad of other services all aim to make our lives easier and more cloud-centric. Trouble is that these services are all separate. When a group you're working with adds a new event to a Google Calendar, adds some relevant files to Dropbox, and scribbles some notes in Evernote, that's three different sites you need to track.

Evernote is a great little cross-platform service that lets you sync notes between devices and save them in the cloud. Using Evernote is so seamless for me, it's like outsourcing my memories to the internet. The app was nothing to sneeze at before, but it just got a big update to version 4.0 that brings a new look and a few features that fit in perfectly with Android 4.0.

There is a new home screen with big, friendly buttons to make a new text note, audio note, photo, or upload a file of any sort.