For years, governments around the world have tried to block various web services. This has often proved tricky in recent times, as the recent Telegram bans in Iran and Russia revealed. For example, Russia broke countless other sites while attempting to block Telegram, because they shared the same infrastructure (AWS, Google Cloud Messaging, etc). Amid talks of a complete reboot and much cheaper hardware in Android One's original Indian market, Google's economical partnership with regional handset manufacturers continues to expand. Today the company announced Android One's first availability in Africa with the Infinix HOT 2. The phone will be sold in Nigeria for N17,500 (about $88) starting today, after which it will expand into more countries: Egypt, Ghana, The Ivory Coast, Kenya, and Morocco.

The Infinix HOT 2 (why do all Android One phones have terrible names?) is fairly similar to the other semi-standard phones: MediaTek processor, dual-SIM capability, 1GB of memory. It does vary from the blueprint a bit, because the gold model shown above will be offered with 2GB of RAM and presumably a small price increase.

Dear Egyptian readers: yes, we know you're out there. We're sorry to report that Google Street View still isn't available for the vast majority of your country. And while you'd surely prefer Street View in Cairo or Alexandria for the sake of convenience, at least Google has made a small stop in Egypt... at the place where all the other Americans go first, the Giza Necropolis. Street View is now available in and around the pyramid complex.

Google has taken its trademark Street View rigs around the Great Pyramid, the Pyramids of Khafre and Menkaure, the Great Sphinx, and the various smaller pyramids, tombs, and monuments that still stand in the area.

Egyptian Android users, the day you've been waiting for has finally arrived... assuming that you've been waiting to hand over some pounds to hard-working app developers. Google has updated its list of paid app territories to include Egypt, so open the Play Store and gorge yourself on ad-free indulgences. 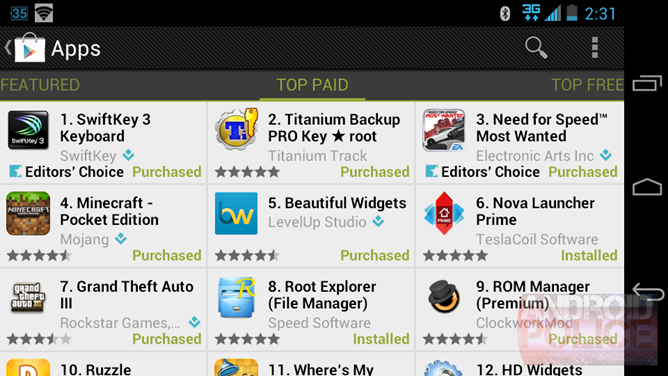 Previously Egyptian Android users could download apps from the Play Store, but only free titles. A long-standing petition at Change.org has called for access to paid apps, though there's no indication that the 54 signatures present spurred Google into action. Like most territories outside of the U.S. and western Europe, Egypt still does not have access to the wider Google Play Music, Google Play Movies, and Google Play Books libraries.