Dropcam is an incredibly useful product, but like with most things, there is always room for improvement. For example, if you're monitoring a room that people frequently walk through, maybe you don't want a notification every single time someone hits a hot zone. Maybe you just need to know if something happens in the very back corner. With today's update, that's now possible for users who subscribe to Dropcam's Cloud Recording service.

DIY home surveillance has become infinitely easier over the past several years, with options like Dropcam leading the way. The product offers a nearly-instant setup, 24 hour monitoring, and optional CVR cloud storage of recorded videos. While all this is great, there was certainly room for improvement in the camera's companion app, which recently received a major update to version 2.6 that brings some much-needed features, making it substantially more useful than before.

About a month ago, Dropcam released Dropcam Pro ($199), an upgraded version of its previous camera, the Dropcam HD ($150). This new version boasts quite a few improvements over the HD version (which is now simply known as "Dropcam" and nothing more), like a wider field of view, increased zoom, improved low light vision (night vision), and better audio quality. So, basically everything. Well, everything that matters anyway. The real question is "how useful is it?"

If you've always dreamed of having a way to monitor your kids, pets, house, or all of the above from your mobile device or PC and haven't looked into Dropcam, you're missing out. And today, the company announced the newest member to the Dropcam family: the Dropcam Pro. Sounds fancy. 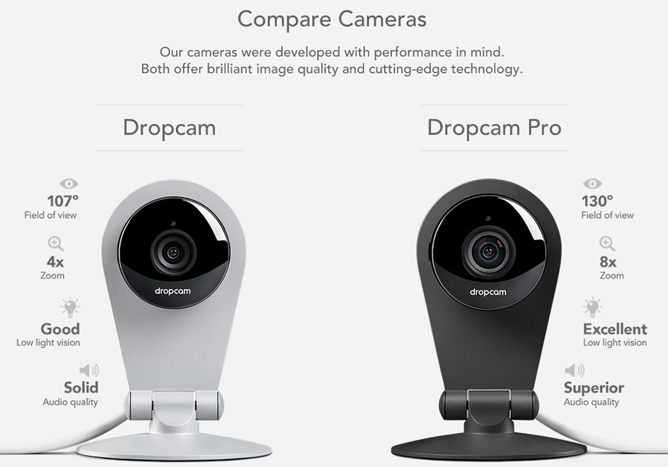 This Pro edition camera features quite a few upgrades from its predecessor (which isn't going away, by the way - it'll just be called "Dropcam" instead of Dropcam HD henceforth), including sharper image quality, 8x zoom, 130 degree field of view, and enhanced two-way talk.