Flashing this is extremely risky, and could potentially brick your device. You've been warned!
Read More

Verizon just started pushing a small OTA update to the Droid Bionic that brings a few small enhancements to the device: 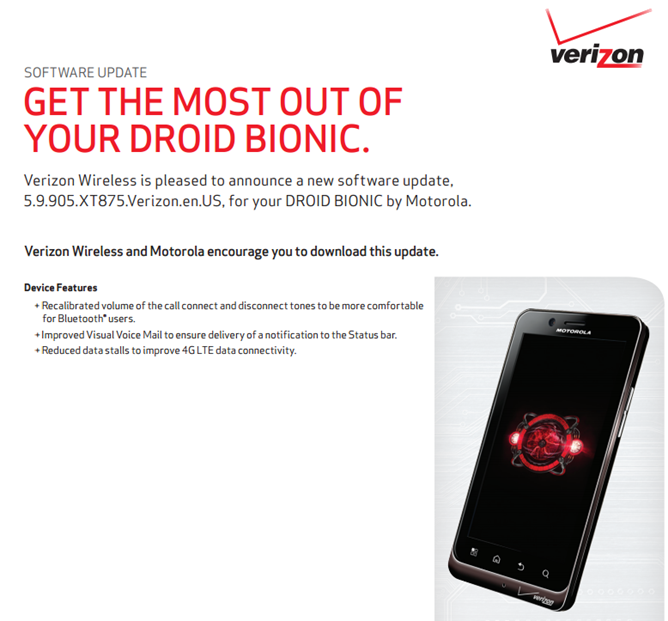 While it's not ICS, hopefully it will fix the LTE issues that users have been experiencing for quite some time.

Read More
Update: We started hearing word last night that this update is rolling out, and that seems to be confirmed across the board. Hit Settings > About phone > Software update to see if it's available on your end. Thanks, Scott!

Verizon updated its support documents for the Motorola Droid Bionic earlier today with info of an OTA update that should fix a gaggle of issues with the device.

Among the fixes, you'll find improved 3G and 4G connectivity, "improvements in device stability" to "help avoid power cycles," improvements in the messaging application, and a fix for the issue that caused apps to disappear from the app tray when moved to the SD card, among others.

After Google's Ice Cream Sandwich announcement, the obvious question on everyone's mind was will my device get it? Motorola has started to address that issue, albeit very slowly.

A note about Ice Cream Sandwich:

Earlier today, Samsung made available the kernel source code for T-Mobile's Galaxy S II -- the latest of many source releases from Sammy. Of course, if you're not into developing, hacking, or modding Sammy phones, this sort of thing is of little value to you. However, if Moto is your flavor, and you want to make a beastly phone a bit more beastly, listen up: Motorola just released the Bionic source.

I hate phone cases. When I bought my Nexus One back in March of 2010, the first thing I did with my very first smartphone was head over to Amazon and start searching for a cool and convenient way to protect it. So I bought some leather ordeal with a flip cover and all sorts of gimmickry, and I hated it. I used it for 2 days, and since then, it has occupied my box of unwanted electronics and related accessories.

Amazon has reduced the price of the Motorola DROID BIONC for new Verizon subscribers to just $150 - and you'll get a free $50 Amazon Gift Card to boot, which would probably wisely be spent on a spare battery and charger. 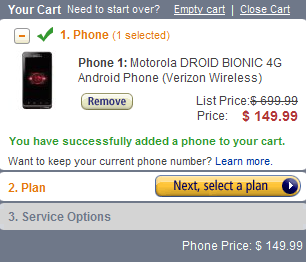 For current Verizon customers, the price remains unchanged: $250 with a renewal of your 2-year agreement.

The Android dev community has a well-deserved reputation for releasing new versions of ROMs at breakneck speeds, and they're not slowing down with the newest kid on the block, the Motorola DROID BIONIC. In fact, @cvpcs has already ported CyanogenMod 7 to the device, and though he isn't ready to release it just yet, he has put out a video to whet our appetites:

Of course, since this is the very first time the BIONIC has successfully booted into CM7, there are plenty of bugs, including:

Regardless, this is certainly a viable first chapter in the BIONIC's ROM development, and we look forward to the continuation of the saga.

Did you recently do something horrible to your Droid Bionic? Tired of staring at that red Motorola logo? This freshly released recovery file will have your bionic running like new in no time.

Interestingly,  Motorola has changed the recovery file format from the tried and true SBF file to the XML based FXZ file. There's isn't a huge difference between the new and old file format, but according to Brief Mobile's head honcho, Kenneth Pennington, FXZ is "more transparent and customizable."