After more than two years without a major update, Pushbullet rose from the dead last month with a ton of new features. The app received a new bottom navigation bar, adaptive icon support, and a dark mode (if you have Pushbullet Pro). Another update has now arrived, with even more long-requested features. Sharing from one app to another has been a mainstay of Android for years and years. It was one of the features that first drew me to Android: no more copying and pasting, no more having to open Twitter or WhatsApp to send a picture I just saw in my Gallery. Apps could talk to each other and the experience felt cohesive and seamless.

But with time, the Share UI in Android has languished, stuck with the same features and problems. It switched from a vertical list to a grid, it added direct share in Android 6.0 and app pinning in Android 7.0, yet these felt like putting lipstick on a pig: the Share UI remains slow, bloated, convoluted, and if you pay close attention to it, one of the most inconsistent experiences on Android to date.

Android's direct share feature debuted on Marshmallow and makes it easy to share links or media from any app on your phone. You can use it with most popular messaging services, email clients, and even note-taking apps like Keep. To be able to share directly to an app, the maker of that app needs to implement direct share, so there are still some apps it doesn't work with. Instagram was on that list until pretty recently, but not anymore. Facebook Messenger, mostly just referred to as Messenger these days, (or "I'll send you a link on Facebook") has improved at a rate of knots over the last year or so. It's had a material overhaul, nicknames and color functions added, group calling, games, new emojis, SMS support, and probably a lot more. Today another new feature has arrived Messenger, especially for Android: Direct Share.

In my travels across the web, I've seen many people asking for this feature. Well, now it's here, and it works as well as you'd expect it to. Find a tweet, reddit post or comment, a link, anything that brings up Android's share menu, and if you're running at least version 88.0.0.11.69 or above (thanks, Alexander Sofinskiy), plus Android 6.0 Marshmallow or 7.0 Nougat, you should see your most-messaged people appear in the Direct Share menu above the apps.

Messaging and communication apps are some of the best targets of Marshmallow's Direct Share API. Instead of first picking up an app to share something to and then selecting a target contact, if an app has implemented the functionality, your most frequently contacted people within it will appear at the top-level of the Share menu, above the different app icons. It's a faster and more streamlined experience that I personally love and use several times a day on WhatsApp.

Now Google's own Inbox app is implementing the same feature. Contacts you email often will, presumably, show up in the Share menu so you can quickly send stuff their way without having to choose Inbox first and then manually enter them as recipients of the email. Hangouts for Android version 10.0 is now available for download - the big feature add? Direct share support, allowing you to share content directly to your commonly-used Hangouts contacts straight from the share menu. For big Hangouts users, this is a huge convenience when sending things like photos, videos, or even just simple links. 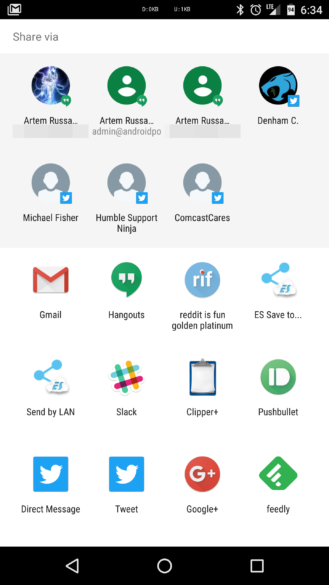 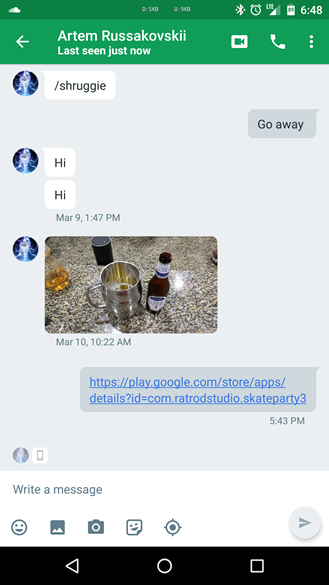 The version 10.0 APK doesn't contain any other major changes that we've yet found. We did notice, as in the right-hand side image, that the send button now has a drop-shadow when it's grayed out. So that's something. But direct share appears to be the big update for now, with Hangouts for iOS also having been updated to v10 today.