It was only a couple of days ago that the Play Store got updated to version 6.7 with several new features including better access to betas and beta feedback, features that were soon reverted through a sever-side switch probably because they were revealed a little prematurely. Now we have official word from Google about those new betas as well as plenty of other goodies for Google Play that are in store for users and developers alike.

You'll no longer need to scour Google+ or read Android Police to find out about app betas. Wait, come back, please keep reading Android Police so I can get paid.

Remember when Google started rebranding all of its Play icons with new colorful and triangular shaped ones? That was more than a month ago — man does time pass fast! Now that the Play Store and the different entities have received their visual icon refresh, it's time for the backend to also get the same treatment. After all, you don't want your product's graphical identity to be scattered and incoherent, do you?

That's why the Google Play Developer Console has just received a small uplift: gone is the old Google Play icon with the confusing Google logo in one font, "Play" in another, and "Developer Consoder" in a third one. There are multiple reasons to leave a review in the Play Store. One is to convey to other users how good or bad an app is. Another is to communicate to the developer.

Google has recently changed up the dashboard that software creators see when they sign into the Developer Console. The new page shows how ratings have changed over the course of days, weeks, and months (pictured above). This overview makes it easy to see if the release of a new update has any effect on user impressions. Developers can also break down ratings by location, language, and other variables. Running a good business requires an intimate knowledge of anything and everything that affects its operation. This means keeping track of numbers, reports, and any other data that can possibly be accumulated. Distributing apps on the Play Store is no different. Developers need to know if users are leaving bad reviews, if their apps are crashing, or if the install numbers suddenly rise. While the Play Store does tracks these things and more, many companies have more specific needs. Google is now allowing developers to export this data so it can be analyzed and re-used in many different ways. 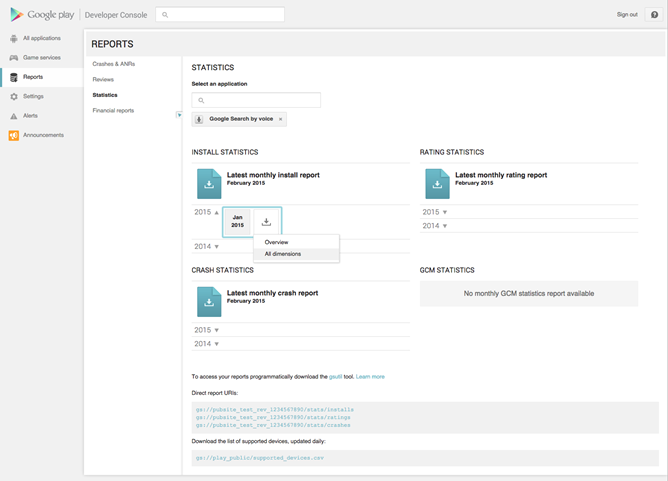 Data is available in an assortment of reports for subjects ranging from financial details to crash records.

For an app developer, there's nothing worse than finding out your latest update is catastrophically flawed and blowing up for your users. This is the reason Google introduced the alpha and beta channels, and then added staged rollouts. These features give developers a way to steadily release new versions into the wild, discover their bugs, and fix them before a wide release. However, all of this still relies on treating some of your users as guinea pigs. If you'd like to keep them around, it's best to minimize the fallout of a bad release as soon as it's discovered. To make things a little easier, Google has added a new button to the Developer Console that stops a staged rollout immediately.

The Google Play Developer Console has undergone some pretty major changes over the years, including a complete overhaul 2 years ago. While the improvements continue to make for a more powerful and usable tool, some developers still find areas where it could be better. Google's engineers don't have time to build everything for everybody, but a new version of the Google Play Developer API makes it possible to build quite a few things for yourself. The new API allows developers to programmatically upload apks and modify almost every detail about your store listings.

The new web API allows developers to build scripts or applications to automate deployment and update product listings quickly and without directly working with the Developer Console.

Developers have certainly made great use of the Alpha and Beta distribution channels in the Play Store since they became available last summer. There was one glaring oversight: developers could only write a single block of text for the "What's New" section. This often led to changelogs that left beta testers in the dark about changes or confusing regular users with promises of new features and fixes that hadn't yet materialized in the stable channel. Well, this problem ends today. Google has finally opened up support for distinct changelog text for each channel! 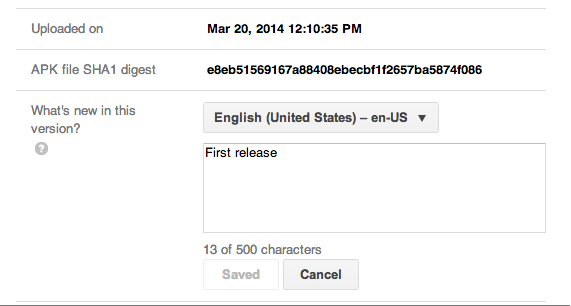 Things don't look all that different from before.

Google has been pushing developers to build tablet-optimized UIs for their apps since the Xoom was the hot new challenger to the iPad (haha). Okay, so that didn't work out very well, but with the release of devices like the Nexus 7 and Nexus 10, devs are finally starting to see the value of building a great tablet experience. Of course, it's not like you'd know. The Play Store is terrible at showing off tablet UIs, but that's about to change. Google is updating the developer console to verify tablet compatibility and break up screenshots for tablet/phone interfaces. 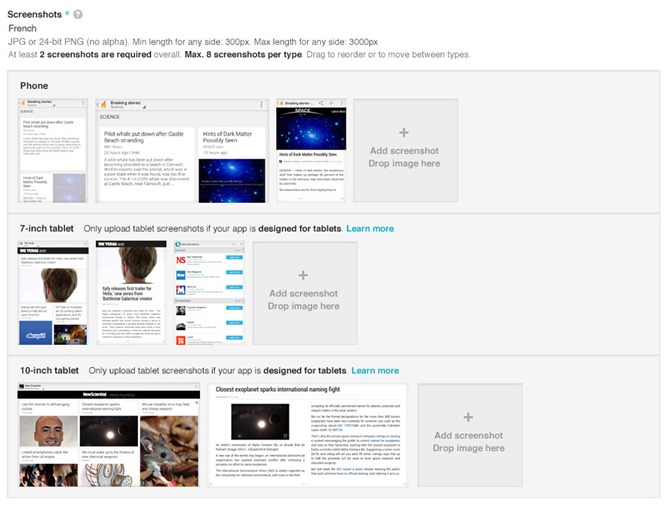 From now on developers uploading apps will have the option to verify they have adhered to the tablet UI guidelines for 7 and/or 10-inch slates.