Google added Daydream to Android way back in Android 4.2, and Google proceeded to do absolutely nothing with it. Well, almost nothing. It's used on Android TV more than on phones and tablets. With the announcement of the new Daydream VR platform, we were wondering what would become of the "old" Daydream. We didn't have to wait long to find out; they changed the name in dev preview 3. Google handed out the first Cardboard viewers at I/O two years ago, which was a nice casual take on VR. With Android N, Google will start taking VR seriously. Daydream is the name for Google's new VR platform, which will include specifications for phones that properly support VR, headset reference designs, and a revamped VR interface/store.

Beep. You're so popular, you got another new message. Buzz. I just found some stories for you to read about the latest -gate everyone is talking about. Beep. Your friends think your latest Instagram selfie is dashin', I told you that Valencia filter cleaned out your face nicely. Buzz. Beep. Buzz. If you don't mind this notification overload and want to see more of them, everywhere on your phone, then NotifWidget is for you.

After granting it access to your notifications, NotifWidget allows you to place a widget on your homescreen, lockscreen, or Daydream, with all of your latest alerts. You know, just in case dropping down that top bar is too much work for your finger.

A new update to Google+ is currently rolling out, and when it hits your device, not only will it bring along the usual bug fixes and performance increases, it will contain a number of new features. The Photos app now supports Android Beam, so two Android owners can share images with one another over NFC. There is also the new option to set images within Photos as a Daydream that plays whenever a device is docked. Lastly, users can pull up photo details from the drop-down menu, an ability that's more useful than it is exciting. A Google+ developer has shared screenshots of all three new features in action.

Flipboard's release last summer was hotly anticipated to say the least. A recent update to utilize the screen real estate of Android tablets bumped the app up another notch, and today's update (to version 1.9.18) puts the icing on the cake. As of today, Flipboard has Daydream functionality for Android 4.2.

Daydream, when it was first introduced, seemed kind of boring (okay, you can look at a lovely animated gradient while charging). The feature was, to put it mildly, more fluff than substance. That said, as a Flipboard user, my opinion of the feature has suddenly shifted. Playing with multicolored jelly beans (while delightful) can now be replaced with actual information.

Android 4.2 brought a nifty, albeit it somewhat useless, new feature called Daydreams. In a nutshell, Daydreams is just a screensaver, which might be useful in some situations - specifically on tablets. For the current time, though, there are only a few different stock options for Daydreams: clock, colors, Currents, Photo Frame, and Photo table. There are also a few apps out there that have incorporated the feature - like Beautiful Widgets, for example - further increasing Daydreams' usefulness. 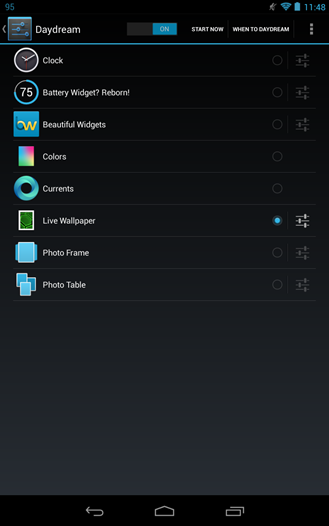 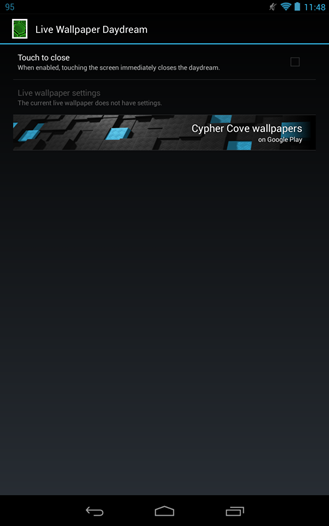 Live Wallpaper Daydream, however, is a little different. It's simple in nature: it lets you use the currently-applied LWP as a daydream.