Regardless of whether you use Amazon's app store for Android, there's no denying that a free app every day is a good deal. Of course, sometimes the deals are better than usual. Today's free app of the day is Servers Ultimate Pro, which is normally $8.99. 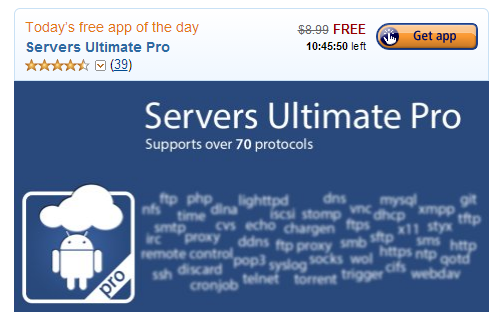 For those not acquainted with the app, it allows users to run servers from their mobile device, with over 70 protocols supported (see the full list in the app's description), and a heaping handful of network tools. The app does require root for a few protocols (like VNC and VPN), but otherwise Servers Ultimate Pro doesn't have very many limitations.

Those who missed out on eBay Daily Deals' recurring deal on the Nexus 7 ($30 VISA gift card, ear buds, 32GB Nexus 7 for $259.99) the last four times we've seen it, Daily Deals has pulled through once again, this time with a significantly better price. Though the 32GB slates up for grabs are refurb and don't come with a random pair of earbuds, $189 is an undeniably good price for a 32GB Nexus 7 which, if new, would cost buyers $249.99 from the Play Store.

If you're in the market for a Nexus 7, don't want to pay full price, and yesterday's 1SaleADay deal left a bad taste in your mouth, eBay might have what you're looking for.

Through eBay's Daily Deals, seller Tiger Direct is offering up refurbished 16GB models for $169.99 shipped. That's about a $30 discount over the Play Store's price (plus shipping).

A high capacity microSD card is a good upgrade for any power user, even if at first blush you don't think the space is required. From my own experience, I never thought I needed one for extra space - I always had plenty enough storage as it was, or so I thought. But then I tried rooting a tablet and realized I needed a microSD card to do so, so sure enough, I ordered one. And today, I have no regrets; I keep music on it for local playback (since music streaming can still be spotty at times) and a few movies and photos that can be swapped from device to device seamlessly.

The Guardian is one of the most popular daily newspapers printed in Britain and its web portal, Guardian.co.uk, is also a leading online newspaper, containing nearly all the articles of its parent as well as significant original content. Unlike other web portals of printed publications such as the New York Times and the Economist, all the articles on Guardian.co.uk are freely accessible. To continue ensuring it remains the leading publication in all formats, Guardian has launched an Android app delivering all the latest content from Guardian.co.uk to Android phones and tablets.

The app is very similar to the Economist and New York Times Android apps, with plenty of content culled from various sources as well as images, videos and audio extracts.

Just for fun, I entered the data points into a spreadsheet and extrapolated them using a trendline.