We've been seeing signs for a little while that Google Pay was readying transit ticket support, with the website even being updated to confirm as much. We've been furiously checking the app to see if there's any sign of the feature, only to be disappointed each time. Now, Google has made transit tickets on Google Pay official.

It's been a while since we've had any good UK related Android Pay news, the last tidbit being the addition of Metro Bank to the service back in February. You may have seen that American Express got Android Pay support in Canada recently, something I was more than a little bit jealous of as I've been waiting to have my Amex on my phone for ages now. Finally, my calls have been answered, and Amex cards now work with Google's mobile payments app here in the UK. 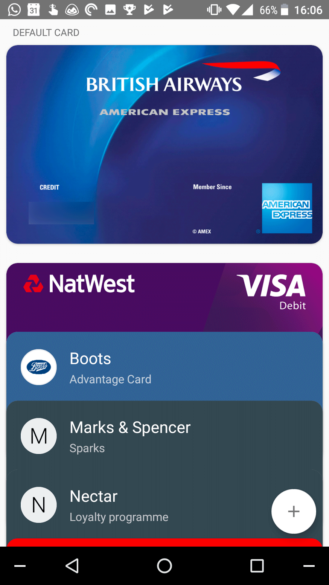 This makes me happy.

I didn't get a notification about this, which I might have expected given my Amex card is set up in my Google account.

Android Pay has barely been available in Canada for a month, but it already has a good selection of debit and credit cards signed up to use the service. The latest to get on board is American Express, adding the first card that isn't a MasterCard or Visa to Android Pay in the country. We've been getting tips about this for months, but now it's finally happening. Google has announced on the official Android blog that Android Pay is coming to the UK, with major bank and retail support in tow. The post says, "in the next few months Android smartphones will become even more useful with the launch of Android Pay," meaning we don't know exactly when it's coming. But be assured it is. In fact, various people have been reporting that Nationwide cards have worked for payment since the start of this month, although we can't verify this.