You're working at your desk or leisurely browsing from your computer at home, you forget you have a meeting or event soon and that you should leave to make it on time. Your phone may or may not notify you that it's time to leave, and if it does, you likely miss it. Next thing you know, you're rushing out and reaching your destination late, or you get a very angry call from the person you were supposed to meet. That shouldn't happen in our connected day and age, but sadly, it still does. However, there's a way to prevent it: Google Maps has time to leave notifications on the web and you can easily turn them on.

I don't think any computer I have ever owned has had enough USB ports to satisfy my needs. Mics, headsets, keyboards, cameras, cell phones, and this thing all demand access to my ports and there are simply not enough to go around.

That's why I'm so glad that USB hubs exist — They increase the number of connections at your disposal and keep your gadgets from fighting gladiator style death matches to determine who will take the last computer port (actually, that would be kinda awesome).

Alright, enough small talk, here's the deal. The Unitech Six Port USB 3.0 SuperSpeed Hub is on sale on Amazon for $19, down from its normal price of $31.

March Madness officially begins tomorrow (March 13), and before all is said and done on April 2, a whopping 67 games will have been played. It's tough to keep up with the sheer number of games going on, but it just got a whole lot easier thanks to the fresh-on-the-market official app, NCAA March Madness Live.

The app is free, and offers an impressive list of features:

- Live game radio of all 67 games
- Live social chatter for teams in every game
- Fill out your official NCAA Bracket Challenge bracket right from your Android
- Track the entire bracket live throughout the tournament
- Get alerts for upsets, overtimes, crunch time (close games), and your favorite teams
- Post directly to Facebook and Twitter
- Use My Channels to see where each game is on all four networks – TBS, CBS, TNT and truTV

You can also upgrade the package in-app for $3.99, which allows you to:

- Watch the NCAA Basketball Selection Show live on Sunday, March 11
- Watch LIVE streaming of all 67 NCAA Men’s Basketball Tournament games
- Watch a live stream of team practices for the Final Four®
- Watch highlights of all 67 games; highlights available right after each game
- Take it with you: Buy it once and use the March Madness Live account you create to login and watch on your computer.

One of these announcements is the Alpha version of their App Player for Windows. If the name didn't already clue you in, BlueStacks App Player allows you to run Android applications on your Windows machine and enter a whole new level of Appoholism. This means that all of your favorite Android apps are now also your favorite PC apps and, by extension, your favorite Android games can now be your favorite PC games. Imagine the convenience of playing Angry Birds on a huge screen that isn't in your bathroom (Android Police cannot be held responsible if you get confused in this scenario and require new pants).

There are 2 options you could go with - both use the WOL (wake-on-LAN) capabilities most modern computers should have baked in (though you may need to enable them in the BIOS and power management settings of your network card).

If you've ever wanted to keep an eye on your computer from your smartphone whilst you're out and about, then you'll know how limited your options are. You could use a remote monitoring tool such as LogMeIn Ignition to physically control the machine, but it doesn't offer a quick overview of resources on your phone and the application costs a cent shy of $30, which isn't exactly a price that encourages impulse buying.

If LogMeIn doesn't fit the bill, and you're looking for an application that can show you all the information that you need to know on the screen of your smartphone, without having to take control of the actual machine and navigate Windows on a 3.5-inch screen, then you may want to take a closer look at PC Monitor.

Read More
This is the latest in our Weekend Poll series. For last week's, see Manufacturer UIs: Love 'Em Or Hate 'Em?
I have to admit: as a newly-former starving college student, it's hard for me to see the same sort of value in a $400 tablet that I see in a $200 smartphone or a $600 laptop (or even a $300 netbook). During my month or so with the O.G. Galaxy Tab, I found the tablet to be more of a complement than a replacement - though certainly the new crop of tablets with docks and keyboards has pushed them closer to laptops than ever before. Read More

If you're anything like me, you text constantly. There are times, however, that I put my phone down and hop on the computer to do some more in-depth tasks or just enjoy some good, old-fashioned big-screen browsing. When I'm doing that, it's usually a pain to receive a text message, have to dig out my phone, open the messaging app, and use a tiny keyboard to reply, even though I'm sitting at a much larger, easier to use keyboard. Well, that's not a problem anymore - now I've got Texty.

Texty is an app that will forward your text messages directly from your phone to your desktop (specifically, Chrome) using cloud magic and allow you to reply from your computer through your phone's messaging app.

Android users have been clamoring for an official online Android Market solution for ages, and today, El Goog finally delivered with the Android Market Web Store. Once the issues with the "Sign in" button (clicking it returned an 'Invalid Request' error) were fixed, we didn't think twice about delving in and giving it an in-depth look. Read on for our first impressions! 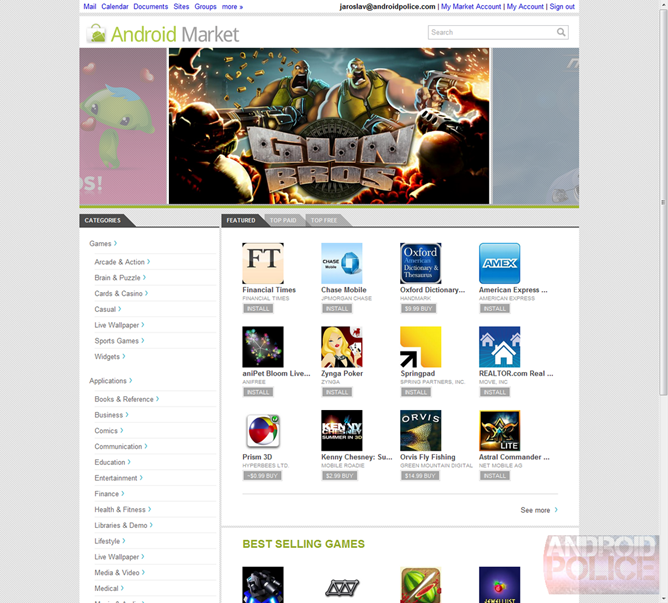 The front page of market.android.com (aka the Android Market Web Store) is simple, clean, and sexy - just the way we like it. Across the very top, there are links to other Google services (i.e. Gmail, Calendar, Docs, etc.),