For some, Google+ is a great community filled with engagement and the exchange of thoughts and ideas. For others, it's a spam fest or a ghost town. Whatever the truth may be, Google is still sending some love toward its social media platform. A new tab has appeared in the side menu called Discover, which does exactly what you'd expect it to do: help you discover things. Twitch has proven to be a pretty popular platform among gamers for streaming live footage and gameplay. However, something often berated about is the lack of a way to find great streams. Today the company is attempting to fix that, with the beta release of Communities to its platform. Social networks have started to embrace algorithmic timelines (that is, where posts are sorted based on how the service thinks you will like it), instead of showing each post in chronological order. First Facebook introduced the feature, then Twitter and Instagram, and now Google+ is enabling it for communities.

Google+ already sorts posts in the home feed based on relevance, and now Communities will do the same. Algorithmic timelines actually make sense for Communities, which are often loaded to the brim with spam. Presumably, content that users actually interact with will be pushed to the top, and the spam will be invisible for most users.

The Google+ Android app jumped to a new version last week, and shortly after, its Play Store page updated with a change log topped by one problematic item:

Here's the thing, moderators couldn't yet. We hit up the app, searched the site, and even asked around. The feature simply wasn't live. Now it is. Moderators can pin posts to the top of a community stream regardless of if they're using the app or the website.

You can see the feature used within the app below. 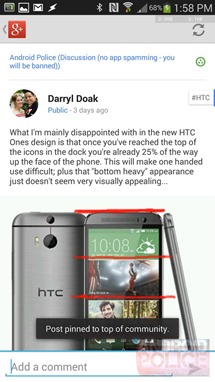 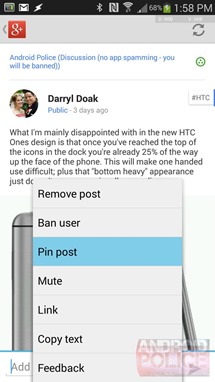 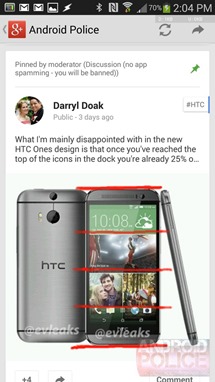 Today, Google announced a new update to the Google+ app that will be rolling out later today that brings a host of new features. For starters, the posts have been redesigned to look a little cleaner, provide more content up front, and are easier to interact with. For example, you can now swipe between photos in an album, and tapping content should take you directly to where you want to go. The current Google+ app has a problem with requiring the user to jump through several hoops to get to the meat of a post, so hopefully this makes things easier.

One of the biggest problems with Google+ has been its inability to create a group wherein all peers are equal. You can create a hashtag that everyone can post to but you can't control the membership of, or a Page that a few moderators can share to, but it's difficult to add users to (for non-public posts, Pages can only add users to circles once they add the Page first). Communities finally fixes this problem by creating public or private groups that anyone within can share to.

The Communities feature includes everything you would expect from a separate group:  you can submit public posts that everyone can see, or just private posts that only members can access.