Transact's main business is switching schools to NFC-based ID cards for students and faculty, with several major universities enrolled in the program. While ID cards from Transact-partnered schools can already be added to Apple's Wallet app, Google Pay didn't support them — until now. No need for guidance from Naviance or U.S. News & World Report: just in time for incoming high school juniors to start worrying about higher education, Google is pushing out a big upgrade to its knowledge graphs on colleges and universities. Search users can not only just look up cost breakdowns and graduate outcomes for 4-year institutions, but also 2-year schools as well as 2-year programs at most colleges and universities.

Instagram has announced a couple of new features aimed at connecting more users. The first, which the company is calling nametags, are customizable card-like graphics that function like QR codes; scanning a user's nametag from inside the Instagram app will take you to their profile. The other is a directory that sorts users based on their college, letting people connect more easily with classmates. Selecting an institution for yours or your children's higher education is a difficult process, but it's one of the most important decisions in life. Google hopes to make it a little easier by introducing new cards in Search that will show information about admissions and cost of various colleges, plus what student life is like in each location.

Amazon Prime is awesome, let's just get that out of the way. Everyone knows most of the benefits from the subscription service by now, but the thing that I hear that keeps some people away is the cost. Despite it being not unreasonable, it's understandable that not every person can afford it. Students are typically among that category, but Amazon has announced new pricing for college kids. You can get everything Prime-related for $5.49 a month — that's the price of a decent cup of coffee on my campus. If you're a student, you've probably used Google to look up information about colleges and universities. You've also likely noticed that most, if not all, schools have their own personalized cards with figures such as acceptance rate, tuition, total enrollment, and endowment. Now, Google is partnering with the US Department of Education to integrate statistics from the College Scorecard into Google Search.

College students: don't sign up for LinkedIn. Please. It's easily the worst social network on the block, career-focused structure notwithstanding. LinkedIn is the 21st century version of the Columbia House Record Club... not that any of you are old enough to remember it. However, at some point you might find that you're forced to create a profile and start playing the most boring MMO on the planet. If you've resigned yourself to such a fate, then I suppose LinkedIn Students isn't such a terrible place to start. If Pichai is a notable figure for Android enthusiasts, he's a positive celebrity for tech fans in his home country. During the packed session at the University's Sri Ram College of Commerce, he endeavored to answer every question he could, both from live attendees and social media.

Canadian college goers, there might just be one less book tucked under your arm as you head to class this semester. Google has announced that Google Play textbooks are now coming to Canada. Students north of the border will have the option to rent or purchase digital textbooks and read them using Play Books on phones, tablets, and PCs. 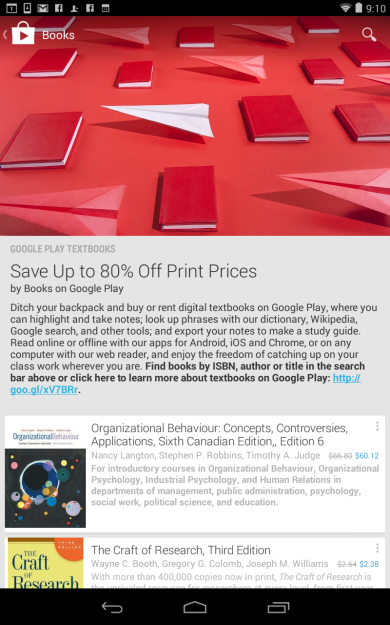 As is the case in the US, textbooks aren't filtered out from other books on Google Play, so discovering them isn't as easy as it could be. Search works well though, with students able to find works by title, author, or ISBN.

Going to school online is what all the cool kids are doing. And the really cool kids are doing it without paying a dime (if you can stretch the definition of "school" to services offering commitment-free classes to thousands of people at once who don't earn college credit). Coursera is one of the more popular options for this non-traditional learning, and now it's got an Android app to make it even easier. 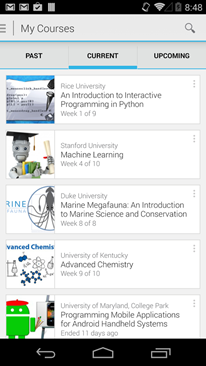 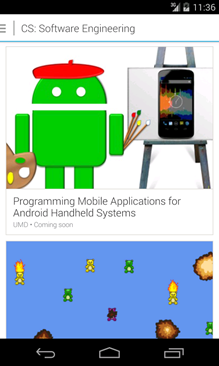 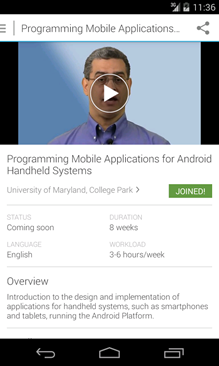 Coursera offers real college and university courses from real schools, allowing dedicated students to get useful learning without the huge time and money it usually takes just to get access.