The Chromecast is already a cheap device, but it isn't exactly easy to get your hands on one right now. The device sold out online and in Best Buys across the US within the span of a day. Now Google Play estimates that new purchases won't ship for 3 - 4 weeks, and who knows when Amazon will restock. What's a person left to do? Enter the CheapCast, a free app by developer Sebastian Mauer that lets any Android device replicate the functionality of a Chromecast.

The Chromecast is already a pretty cheap device, but what if you don't have one handy? Developer Sebastian Mauer is working on an emulator for Android called CheapCast. It would allow you to treat any Android device like a Chromecast, and it looks to be working just fine in his proof of concept video.

The video shows a phone sending video to a tablet, but it could be any device, even an Android HDMI stick.

Ever since Jelly Bean, the reasons to switch to a custom ROM (as opposed to a stock, rooted build) have been slowly shrinking. But today ClockworkMod Recovery developer Koushik "Koush" Dutta gave us a reason to be incredibly excited for upcoming builds of CyanogenMod. With a little tweaking of the famous ROM family, he's managed to integrate Chromecast streaming across the system, making any video or audio app compatible.

For the researchy-types like me, the Chromecast comes with two piece of software to dig through. The first is the physical device software, which, while it is sort-of Android based, it's only Android-based at the low level.

Were you hoping to gather 'round the flatscreen and Chromecast with your local Android Users Group for the live stream of Google's next Nexus event? Too bad: at the moment, YouTube live stream videos just won't work with Chromecast, as demonstrated by our tipster Nathan. We tried it using the Lollapalooza 2013 live stream, and sure enough, it just won't display. 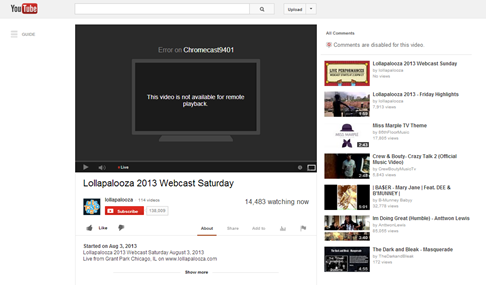 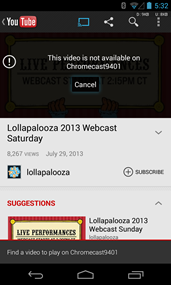 This lack of functionality is documented in Google's support page as well, though the reason isn't clear.

The Chromecast runs a modified version of Android, so of course modders are all over it like white on rice. The folks at GTVHacker already gave us a working bootloader hack and root access, not that there's much you can do with it at the moment except switch to the beta or dev channel. Unfortunately, a quick over-the-air update for the Chromecast seems to have closed this modding avenue already.

The Chromecast has identity issues. It may be based on Android, but it updates like Chrome. The device ships on the stable channel, but it's possible to switch it beta and dev channels. These options are progressively bleeding edge, but this comes at the obvious sacrifice of stability, and there's a strong risk of bricking your device. Granted, it's only $35, far cheaper than breaking a smartphone or tablet. 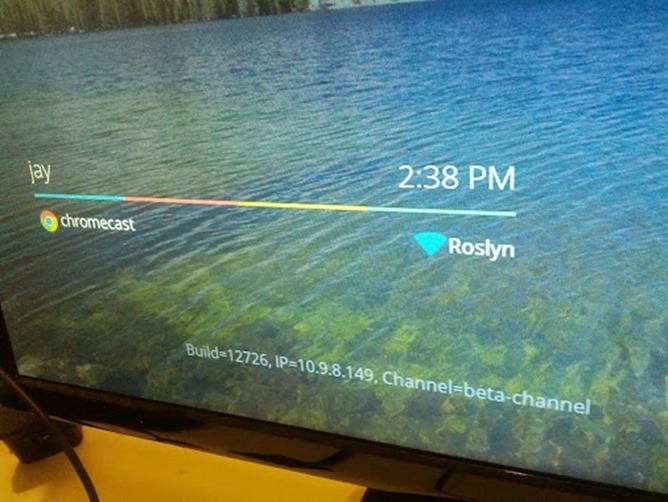 Disclaimer: Android Police isn't responsible for any harm to your device - proceed at your own risk.
Read More

In our Chromecast review, one of Ryan's complaints was that the device can't be used on public Wi-Fi networks, like hotels, for example. Unfortunately, that doesn't look like it's going to change any time soon, according to John Affaki, Engineering Manager for the dev experience on Chromecast. That's a real bummer for anyone who travels frequently and was looking to supplement the crappy hotel TV for something new and interesting via Chromecasts.

Rumors about Chrome OS running on a tiny HDMI stick started leaking out a few months ago, but we were all wrong about what it was going to be. The Chromecast is not a shrunken down Chromebox – it's not even really a Chrome OS device in the strictest sense. The Chromecast is Google's latest attempt to be invited into your living room. It also might be the first one to succeed.