At today's Pixel event, Google announced an impressive statistic -- it has sold over 30 million Chromecast devices to date.

That's not bad for a little dongle that, at the time of its launch, was a rather unique device. The original Chromecast wasn't the only media stick you could plug into a TV, but an impulse-buy $35 price point and remote control-free design made it special.

Google is an American company, as in the United States of America. That means that sometimes - okay, a lot of times - its new programs and promotions are first and often only available to Americans. But today our neighbors to the north finally get something that we don't. And it's pretty sweet: twenty bucks of free credit in the Play Store for owners of the Chromecast 2015 and/or the newer Chromecast Audio! That's better than a free Tim Horton's run. Content Prediction is one piece of the larger Fast Play puzzle, but it's an important one. Content Prediction lets the Chromecast start to buffer a video before you even press the play or Cast button on your smartphone, with the idea that the video will start playing, essentially, instantaneously once you start it. Has it already been three years since the original Chromecast came out? My, how the time flies when you're streaming video. Google marked the occasion on the Google Store's Plus page with the nifty animation below, but there aren't any promotional deals. Not that you really need them - it's $35, for cryin' out loud. In India, things are a little more complicated. The new Chromecast and Chromecast Audio aren't available directly from the Google Store.

We all love the Chromecast thanks to its cheap price and almost endless potential to turn any TV into a smart streaming machine. Last year, Google released an update to the original Chromecast with a few minor improvements as well as a Chromecast Audio that works with all Aux speakers. Now these new gadgets are available for purchase in the southern part of our planet: Australia and New Zealand.

In Australia, the Chromecast 2015 and Chromecast Audio will be priced at $59 AUD (approx. Did you buy the new-and-improved 2015 Chromecast? If so, you may have forgotten that your purchase includes a free movie rental on Google Play Movies, even if you'd already purchased a Chromecast previously (offers are per device, not account - so you get one for each CC you purchased up to a maximum of five). The movie rental offer doesn't apply to Chromecast Audio purchases, in case you were wondering. 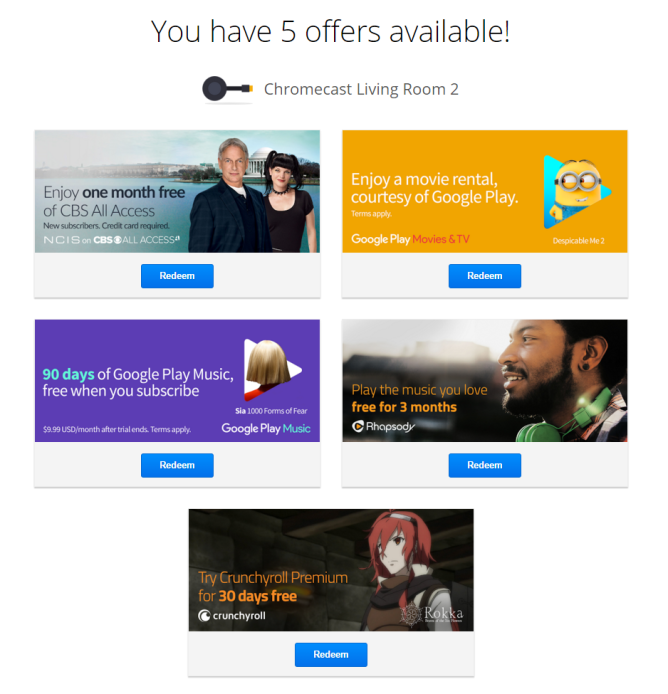 The current offer runs until the end of the year (12/31/15), so there's no rush to redeem it. As always, in order to redeem the offer, you'll need to open the Chromecast app on your device or head to cast.google.com/chromecast/offers while on the same network as or nearby your Chromecast device. The new Chromecast and Chromecast Audio are here! We want to know: did you buy one? The new video Chromecast now supports 5GHz Wi-Fi and has a much-improved antenna array design allowing superior Wi-Fi signal. It also just seems faster generally, and that's got fans of the cast platform quite pleased. Aside from that, though - it's the same basic deal as the last one, albeit with a completely revamped app that Google released to coincide with the announcement of the device.

The Chromecast Audio fills a different niche, essentially offering a way to smarten up old stereo systems and/or speakers by getting them on your local Wi-Fi network instead of using clumsy and annoying Bluetooth accessories or expensive all-in-one systems like Sonos (which admittedly still have their own merits!). Other than that, there are actually no significant reasons from a consumer standpoint to buy the new Chromecast if you already have the old one.