Late Sunday evening the final nail was driven into the coffin of LG's smartphone business, when the manufacturer declared it was halting development of all hardware. One of the (many) areas in which LG fell behind was in the cutting edge of foldable phone development, but it did have at least one alternative: a rolling screen. LG showed off its prototype earlier this year, declaring its intention to make and sell it, and apparently sent it to multiple certification agencies for testing. The Galaxy Note and Tab S lines are both due for a refresh soon. The Note8 is almost a year old, and the Tab S3 is almost a year and a half. Luckily, the successors to those have just passed through the FCC, indicating that they're probably coming soon. The focus of today's announcement might have been the new Pixel phones, but Google also had a nice little surprise that accompanied all the hardware-related news. At the bottom of the blog post for the new Pixel phones, Google revealed that it has a new program called "made for Google" which certifies that accessories like cases, cables, and headphones from different manufacturers meet the company's stringent requirements. We've seen a possible early look at the next version of Motorola's Moto 360 watch earlier today, and now it looks like there are new indications of multiple models for the Android Wear line. Anatel, Brazil's federal telecom regulator (the equivalent of the FCC in the US) has listed two new Motorola devices for certification: the 360S and 360L. The product names obviously point to new watch models, but it's the batteries that should really pique your interest. The listing was spotted by 9to5 Google.

In addition to standard radio documentation for Bluetooth and Wi-Fi, Anatel lists the 360S with a 270mAh battery and the 360L with a 375mAh battery. Specs are sparse, but we do know it uses a MediaTek MT8127A 1.5GHz quad-core processor, Wi-Fi, and Bluetooth.

The original NVIDIA SHIELD (before the Tablet or the set-top box, so just called "SHIELD" at the time) was a surprise revelation at CES 2013. This high-powered Android device with an Xbox-style controller and a flip-up screen was unlike anything we had seen before, and though it never became a runaway hit, many (including yours truly) have been hoping that NVIDIA would update the design in addition to its more conventional SHIELD entries. Get your thumbs ready: it looks like a SHIELD 2 is being certified by both the Wi-Fi and Bluetooth trade groups. 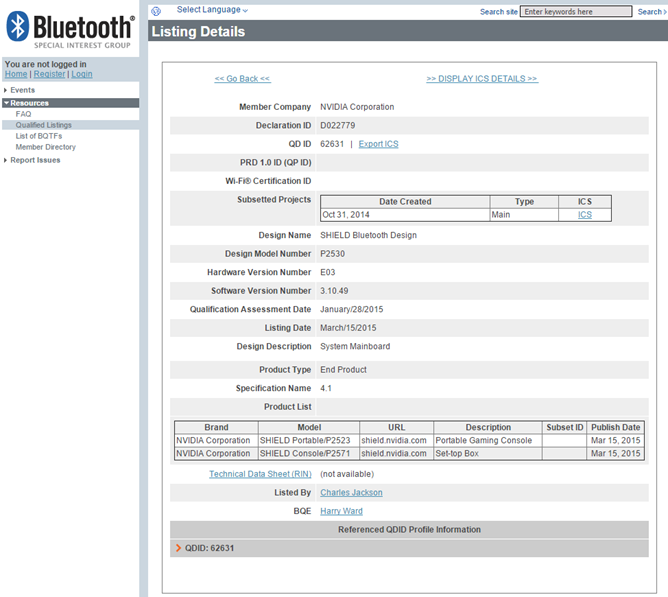