Facebook's Android apps are rarely the best way to actually use Facebook on smartphones. That's why various third-party options have sprung up over the years, giving users better interfaces, smaller and faster apps, and just generally improving the experience. But it looks like Facebook is tired of being shown up: two popular "wrappers" for the site, Swipe and Simple Social, have disappeared from the Play Store. So much of what we do on our smartphone is driven by services, as companies provide us with access to things like cloud storage, social-media publishing, and instant messaging. And while many of us default to accessing these services through their official apps, plenty of third-party alternatives exist. Some of the companies behind these services are more tolerant of those alternatives than others, and we've already seen WhatsApp take heavy-handed action against such software. Now a new round of legal threats is underway, and this time the targets don't seem to be doing anything particularly objectionable.

Users of the enhanced WhatsApp client, known fittingly as WhatsApp+ were quite rightly annoyed yesterday when the Facebook-owned company started temp-banning them from the service for using the third-party app. At the time it was unclear if WhatsApp+ would be able to find a way around the block or if it was curtains. Now we know—it's over. 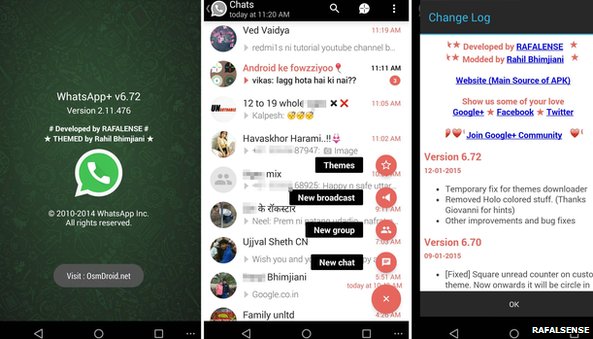 Update: The CyanogenMod team has chosen a new name: cLock. According to the Google+ post, the new name was chosen by virtue of its simplicity.

In a post to Google+ titled "Pitfalls of being so big" earlier this evening, the CyanogenMod team informed followers that CM had been served with a C&D (Cease and Desist) request regarding their Chronus clock widget.

For those unfamiliar, Chronus is CyanogenMod's acclaimed lock screen (or home screen) clock widget, introduced last December, that displays the time in Android 4.2 fashion along with configurable calendar and weather information.

Specifically, the "entity" serving the C&D seems to have issue with the widget's name, which is similar to the entity's own "Cronus."

Apple's at it again, this time back on its "We own the words 'App Store'" reign of terror. While a judge denied Apple's request to bar Amazon from using "Appstore" in a preliminary injunction before the issue is decided at trial, that isn't stopping the world's most infamously litigious tech giant from going after everyone and their brother using the words.

And until the Amazon trial is settled or decided (it's on the docket - for October 2012), Apple is free to go about threatening and pursuing more legal action, even though its trademark on the words "App Store" remains actively contested (by Microsoft) in its bid for certification at the USPTO.

Despite a lot of fun Motorola hardware leaks lately (even some love for AT&T), Moto would like to remind us that they aren't much friendlier than Apple when it comes to unintended dissemination of their intellectual property.

The recently leaked update to Android 2.2 for the DROID X has been quite a popular download for daredevil users, and apparently Motorola has taken notice. While the ROM is now undoubtedly in the hands of every modding and development community member who has any interest in it, that isn't stopping Motorola from issuing cease and desist letters (e-mails) to those hosting the file.

Recent iPhone Game of the Year (Pocket Gamers) winner Firemint, who won with their game Flight Control, issued a C&D Order to StickyCoding in regards to their game, Flying Aces.

Here is the quick version of what's going on, according to ThisAndroidLife: Firemint has issued a C&D Order to StickyCoding to immediately stop sales of their game, Flying Aces, because it's 'strikingly similar' to their game, Flight Control.

StickyCoding claims they have not used any part of Firemint's coding, graphics, or overall assets from Flight Control. The game looks/plays similar to Flight Control but what game from this genre does not?