Looks like we might finally start seeing the candybar form factor a little more often [or maybe not, given the specs --Aaron], as Acer has unveiled the BlackBerry-esque beTouch E210. The E210 packs a four row QWERTY keyboard and 2.6" touchscreen into a 115 x 62.5 x 11.5mm chassis. It also includes an optical trackpad for more precise navigation needs.

Verizon has just announced the Droid Pro (that's right, the same device that was previously rumored to have a dual GSM /CDMA radio for global roaming, a 1.3 GHz processor, and a 4" display), and let me tell you, the thing's got a few surprises hidden up its sleeve. 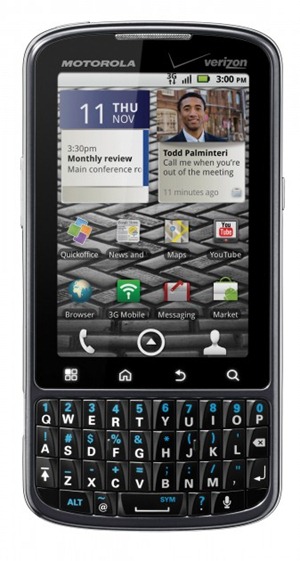 For starters, it's not a landscape slider, unlike the Droid 2. Instead, Motorola's decided to go with a candybar form factor for this one, much like the form factor used by RIM for numerous BlackBerries and also by Palm for the Pixi.