buy one get one free The phrase 'buy one get one free' can be music to the ears of consumers but doesn't often apply to expensive devices like smartphones. For that reason, this deal from Verizon is looking pretty sweet. Getting in on the Valentine's Day spirit early, the carrier will give you 2 brand new phones if you trade in your current one. That's a phone for you, and one for your other half, perhaps. Read More
Winners have been selected. Congrats to:

We'll be in touch with the winners shortly.

We started off Android Police's holiday giveaway series yesterday with some great phones and other gadgets from RadioShack - today we're upping the ante. Can you say twenty Sprint smartphones? Because that's how many we're giving away, thanks to the awesome people at Sprint. 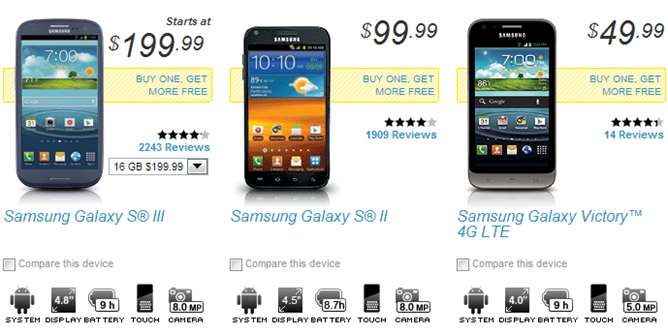 As a friendly reminder, Sprint's Buy One Galaxy, Get One Free promotion is going on right now - you can buy one of three Galaxy smartphones (Galaxy S III, Galaxy S II, and Galaxy Victory), and get a second one free.

With the cheapest one costing $149.99, Verizon's Droids aren't exactly stocking stuffers, but at least the price comes with double the value now. That's right - the infamous BOGO (buy one, get one free) deal has now been extended to the carrier's flagship Android devices... all except the Droid Pro, that is. Additionally, the original Droid 2 is excluded from the ad despite being part of the deal, most likely because its global brethren already appears in the ad. However, why the Droid Pro is being left out of the fun is anyone's guess.

Here are the instructions for the aforementioned devices:

According to Gameloft, this promo will run through the holidays, presumably including Christmas and the New Year.