When it comes to Android, BlackBerry has the PRIV, and it also has BBM. The messaging app received an update last month that added support for Marshmallow permissions and removed privacy features from behind a paywall. Now users in the US and Canada have the option to start streaming video. BlackBerry is all about Android these days with the PRIV leading the charge. The company hasn't forgotten about BBM, though. The app has gotten a few significant updates since it came out, and today there's another major one with better notification control, proper support for Marshmallow permissions, and more. Plus, all privacy and control features are no longer behind the paywall.

When the BBM app came out a few years ago, it was not very attractive. It continued to be unattractive right up to this very day, but now the material design update has rolled out to the Play Store. Suddenly, it looks quite nice. Next
Previous
Next
Read More
34

I never thought I'd live to see the day when BBM adopted an actually decent design on Android. I remember using the messaging service when it first came out on our platform, and it was a horrid experience from the tiny emojis to the clunky interface to the fact that everything didn't look right on Android. But BBM has been improving over the past months, adding Android Wear support, a landscape mode, message retraction, and more. The app is about to get another boost forward this time with a Material overhaul. 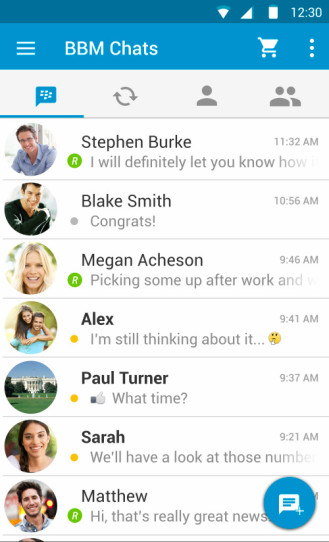 A new beta, released for members of the BlackBerry Beta Zone, packs a swanky new interface with bold colors, a transparent status bar, a FAB, and presumably more.

BlackBerry will not be ignored, guys. While you're off gawking at the new Samsung and HTC phones, BlackBerry is slaving away to roll out a new version of BBM for Android. How about a little appreciation, huh? The update, which is expected tomorrow (3/2), includes the promised Android Wear support and a few other interesting features. 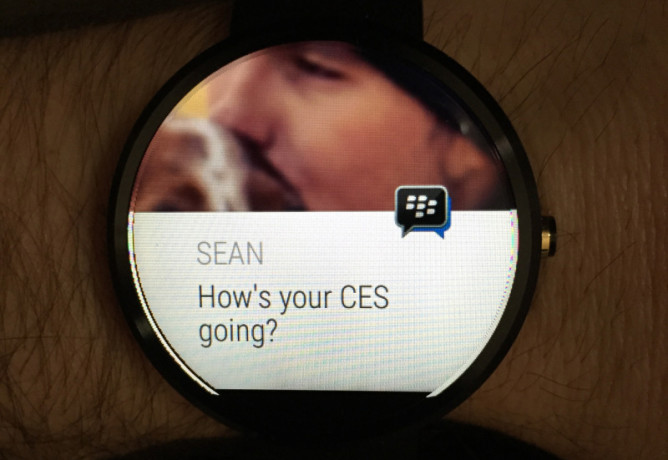 A messaging service is only useful so long as a certain amount of your contacts use it along with you. So we'll refrain from making jokes at BlackBerry's expense (not a small effort, mind you) or pointing you towards alternatives like Hangouts or WhatsApp. If you use BlackBerry Messenger, and your friends and/or associates do too, pointing out other options isn't going to do much for you. But here's something that will: BBM is getting Android Wear support! 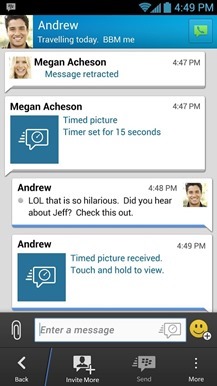 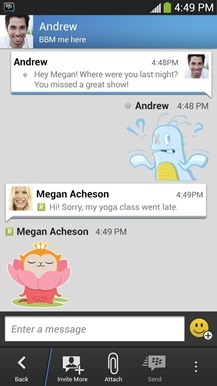 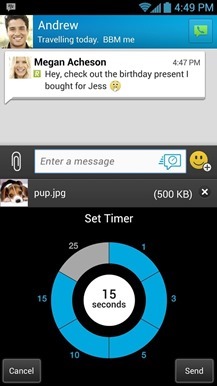 Not now. Sometime in the near future. Exactly when we can't say, and neither can BlackBerry, because their CES press release on the topic only mentions a vague "early 2015" date.

Now when you send a message by mistake, you can simply tap the retract button. This works both before or after the text has been viewed, so even if you weren't able to prevent your ex from seeing that kissy face emoticon you intended for your new significant other, you can at least strike it from the record.

BlackBerry's looking for ways to make money these days since producing phones just doesn't pay the bills like it used to, and it looks like BBM's latest app update - which has just gone live in the Play Store - introduces one such new approach. Starting with version 2.1 of the instant messaging app, users can head over to the freshly opened BBM Shop and walk out with any of a variety of sticker packs. The idea isn't at all new, but that doesn't make it any less amusing. Each of BBM's packs contain around 20 to 25 stickers. Some go for free, but others cost $1.99.

Say what you will about BlackBerry's viability as a company, but the Canadian smartphone firm's messaging app is quickly shaping up into a powerful client. Today, BB announced that BBM 2.0 for Android is out now, and it adds a whole lotta stuff to the app's growing feature resume.

Of most interest to users is probably BBM Voice, which is exactly what it sounds like - you can now call BBM contacts directly from the app (still no video chat, though). This isn't a VoIP technology, though, so you can only call other BBM users. Still, a nifty way to save minutes if you've got friends you talk to regularly on BBM, particularly those in foreign lands.