In the chart below we see variation between the 2013 and 2014 versions of Samsung and HTC's flagships. The starkest void is noticeable on the S4, where T-Mobile pulled in 6 hours and 42 minutes compared to the 4 hours and 1 minute of the second-place competitor, AT&T.

At Google I/O last week, Google announced Project Volta, its effort to change and drastically improve how Android manages battery life. Since then the folks over at Ars Technica have downloaded the publicly available L developer preview build and put it through its paces. Is there a noticeable difference? Yes, apparently. They were able to get an an extra two hours of battery life out of their Nexus 5, an improvement of thirty-six percent. Regardless of how exact these numbers are, the difference suggests good things. 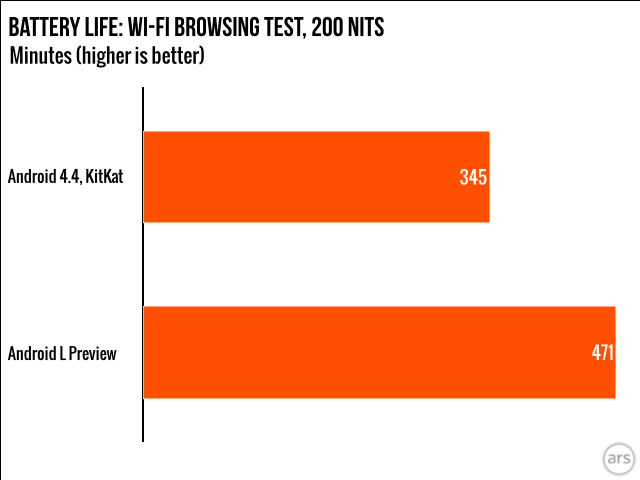 For the process, Ars used a single device, flashed to 4.4.4, signed in, updated apps, charged up, and ran the test (which keeps the screen on and automatically loads a webpage over Wi-Fi every 15 seconds until the battery dies).

Why is that? AMOLED is supposed to only use up power on non-black pixels, right? Well, as LaptopMag points out, the majority of webpages are actually dark text on a light background, a scenario in which AMOLED actually uses more power than an equivalent backlit LCD.