The Asus EEE Pad Transformer has yet to hit US soil and it has only been out in the UK for a short amount of time, but thanks to a collaborative effort from Android hackers @PauOBrien and @BumbleDroid, it's already been rooted. The method is still very rough around the edges right now, and it's not ready for prime time use just yet - for example, there is no backup method (such as Nandroid) - but that should be coming down the pike soon. 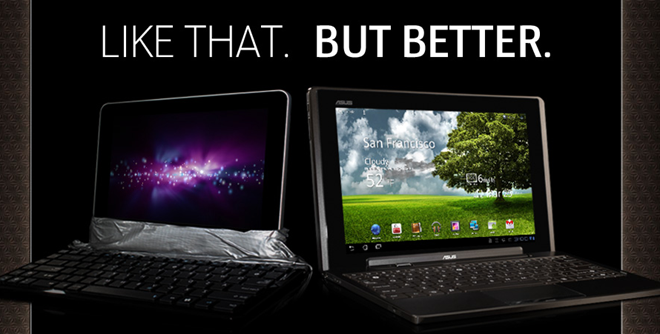 It’s about time someone read the memo about Honeycomb tablet pricing being too damn high. According to Best Buy’s website, the Asus EEE Pad Transformer will be dropping at the awesomely low price of $400. If you haven’t heard about the the EEE Pad Transformer, check this out:

In what is the most carefully-worded way of saying "we don't know" I've seen in a while, Asus's UK marketing manager John Swatton has told Pocket-lint that the company's new Android tablets will be shipping with Honeycomb "if Honeycomb is available." The reason for the uncertainty? Swanson seems to be suggesting that Motorola's XOOM has been given special treatment by Google, while Honeycomb remains unavailable to most, if not all, other tablet manufacturers.

However, there are also some key differentiators between the Slider and the Transformer - for example, the former includes a USB 2.0 port, while the latter comes with 16, 32, or 64 GB of eMMC storage (as opposed to the Slider's 16 or 32 GB of flash).

It's been a long time since I was excited about putting a stylus to a touchscreen, but ASUS' new Eee Pad MeMO might just have what it takes to win me over. For starters, it's running Honeycomb, has a dual-core Qualcomm 8260 CPU clocked at 1.2GHz, and features both a 1.2MP front-facing camera and a 5MP rear counterpart.

The specs are only half the story, though - the tablet will also come with Media Note, which is a glorified notes app, as well as Painter, a painting app where the included capacitive stylus could really come in handy.