Android Wear 2.0 makes a number of significant changes to the functionality of your watch, not the least of which is how you access the app list. Rather than a swipe, you press the crown button. If you want the swipe back (along with some extras), check out Launcher for Android Wear. It's a launcher... for Android Wear. Appfour likes a challenge when it comes to making apps for Android Wear. Try to think of an app that you can imagine very little use for on a tiny watch screen, and Appfour has probably already made it: browser, Gmail client, YouTube Player, messaging, PDF and Drive viewer, Calendar, and more have been developed by the team who continues to cater to the demands of a very niche section of Wear users.

This latest app just keeps the trend going: it's a video player for Android Wear. Because watching videos is the best way for you to use use that tiny round screen on your watch, or maybe because you're too lazy to take your big phone and its big screen out of your pocket/bag/purse, and you just need to watch something now. Google added support for WiFi on Android Wear devices a long time ago, but the feature is a bit of a pain to use. You have to enter the WiFi passwords on your phone, and the connection manager on Wear is limited to say the least. WiFi Manager for Android Wear makes more of the process workable on the wearable itself, and it's free to try. You can already use a browser, email client, and video player on Android Wear thanks to Appfour, and now you can check your calendar too. This dev specializes (apparently) in taking full-size apps and shoehorning them into the small form factor provided by Android Wear. Sometimes it's a bad idea, but it's at least good for a laugh. This one seems somewhat useful, though. Have you ever wanted to view a document on your smartwatch? Don't lie. What, you have? Oh, well, um, now you can, all thanks to developer appfour.

To lay your eyes on 1.3 inches of barely readable fuzziness, open the Documents app on your smartwatch. The app will pull the list of recently used documents from your phone. You can tap on any of them to get a fullscreen view (which ultimately doesn't amount to much) of the paper, slideshow, or spreadsheet.

The developers behind appfour have a few crazy and not so crazy apps under their name. There's the useful AIDE which lets you develop Android apps on an Android phone, and then there are some Android Wear apps trying to pretend that microscopic watch screen is enough to do things we usually use 5-inch+ displays for. Like Gmail or web browsers or YouTube. And now they're back with another app that spells out what it does in its name: Messages for Android Wear.

The app works with both SMS and Hangouts accounts, displaying your list of conversations and the last few messages from each one, and letting you reply by pecking on a keyboard.

Video on your watch. Video... on your watch. Yup, it's a thing now. And not just any video, millions and millions of videos (at least 20% of which feature cats) on the world's biggest distribution service. Pack it in, NASA. Hit the showers, CERN. Go suck eggs, DARPA. There's no need to try anymore: now that we've got a YouTube app for Android Wear, humanity has reached its absolute peak.

Video for Android Wear & YouTube comes from appfour, the developer of AIDE, Gmail for Wear, and the Android Wear web browser. In that context this is sort of a natural progression, but it's still hard to think of the app as anything more than a novelty. 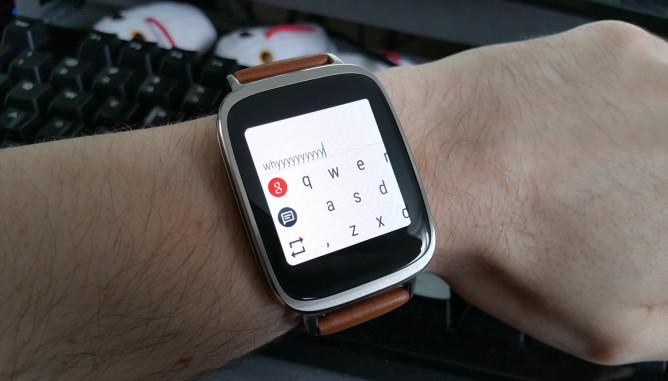 When George Mallory was asked why he wanted to climb Mount Everest, he famously replied, "Because it's there." I imagine a similar disposition possessed the developer of Wear Browser (better known for AIDE) when he shrugged his shoulders and said, "Well, I guess I'll put a browser on that watch." I say this because I can't think of a good reason anyone would do this. Still, it exists.