There's a new little animation when setting an alarm in the clock app that moves the selector hand from the hour value to the minutes value. If that's not entirely clear, have a look at the gfycat below: after selecting the hour for an alarm, the hand now sweeps smoothly into the minutes position, whereas in Marshmallow, the hand would simply reappear in the minutes position without any visual transition or animation.

The Google app has gone through some fairly rapid-fire updates over the last month or so, with new versions popping out every few days. Just yesterday, a somewhat buggy v5.10.22 rolled out in the morning, only to be replaced in the evening by a minor v5.10.23 update to fix some issues with crashing. The changes from v5.9 to v5.10 appear to be rather minor, but a close examination turned up a couple of little things we couldn't ignore.

If you're on Android 6.0 and use the share menu regularly, you may have encountered a rather annoying issue with Android's Direct Share feature. The issue arises when the share dialog pops open and the direct share contacts don't load immediately. Instead, the UI loads, you go to tap what you want, and suddenly the direct share contacts appear and all the app share links get pushed down out of view. See the animations below for the Android 6.0 and 6.0.1 behaviors side by side - the broken version is on the left.

One of the greatest problems in stock Android since the debut of Lollipop last year has been the volume slider - putting aside Lollipop's initially confusing volume modes, the slider unceremoniously pops into place when the user hits the volume keys on their device. Of course I'm kidding, but nevertheless it looks like Google has enhanced the volume controls in the latest Marshmallow dev preview with some motion design love.

Now, when users hit a volume key, the panel slides into place from off canvas. The slider's current position is highlighted with its own translucent halo (which may or may not really be necessary).

With Android 5.0, Google said it's not enough to make everything flat and colorful. Personally, I'm usually not a secure lock screen user. Very rare is the occasion that my phone is out of my sight, so I usually just breeze right past the lock screen. But after a tip from a reader, I'm giving the lock screen a second look on Android 5.1. For users who rely on a pattern-based lock, Android 5.1 has yet another delightful detail - a new animation after a successful unlock. Now, the pattern dots float up more elegantly, gently rolling into the transition that delivers the home screen. The dots have animated in gracefully since 5.0, so it's nice to see their out animation catch up.

When Google introduced Android 5.0 with material design back at IO14, one part of the new design methodology that received a lot of attention was animation. Implementing cohesive, sensible, predictable animations is a big part of Google's new design push, but - as the guidelines point out - "delightful details" are just as important.

In Android 5.1, Google has turned the "dismiss all" button in the notification shade into one such detail. The icon has been flipped around to accommodate a new animation. When the user touches the icon to dismiss all notifications, it smoothly animates out, mimicking the motion of the notifications above it.

Ever wanted the Moto 360's charging screen on another Android Wear watch? Ever wished you could see more information on that charging screen? If you answered yes to at least one of these two questions, then you might be interested in Wear Charging Widget.

The application automatically triggers when your Android Wear watch is charging. With a Moto 360-inspired design, it has an evolving circle that shows the current amount of charge on the watch, along with the time, date, and weather. Then if you want to disable it for some reason, you simply long press the screen to exit the app. 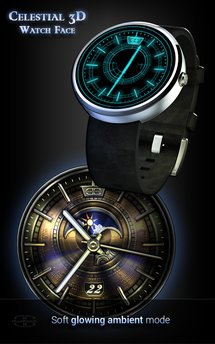 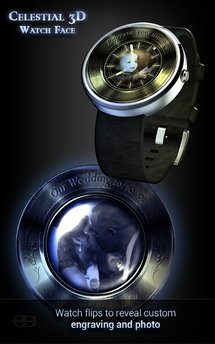 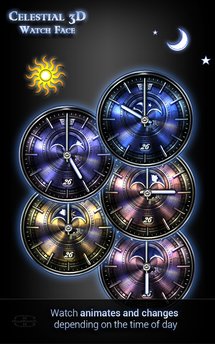 Celestial builds on DualBoot Games' animations and design capabilities to create one of most impressive and intricate watch faces I have seen on Wear so far. Each time your watch turns on, the dial rotates and the inner metallic glow moves a bit as if you had just tilted a real watch toward you. The entire face seems to execute a bit of a parallax effect sometimes, a globe appears out of nowhere and spins at some points, and there's even an option to customize an engraving with a photo on the "back" of the watch.