Google threw the tech world a curveball today with its new Android Wear platform, a wearable version of Android that's starting with "smart" watches. Digging through some of the developer documentation reveals even more information on the upcoming platform than what's in the consumer-facing videos. After reading through the developer site, a rough image of Android Wear begins to take shape. 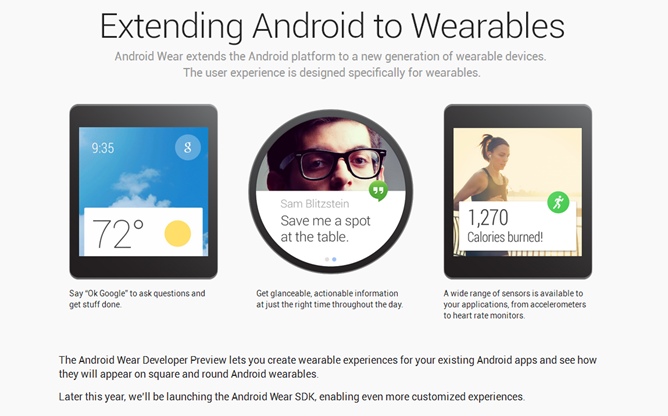 There are three major functions of Wear: a Google Now-style "homescreen" with a a scrollable list of cards, a notification system that alerts you to information from your smartphone, and a series of contextual tools that pop up during certain activities.

Almost perfectly timed with Google's Android Wear announcement, Motorola has laid out its new smart watch plans. The Moto 360 is a round smart watch running on Android Wear that you will be able to actually purchase this summer. I know, this seems like the future all of a sudden.

Google has just announced its plans for Android wearables, and this could make all those other smart watches look like they're standing still. Android Wear is an open Android-powered platform that lets developers plug into existing apps and take advantage of Google services like Now and voice search. There is a preview SDK available right now, and Google says wearables based on this platform are coming in 2014.