This is no April Fools joke: Verizon has updated the Galaxy S6 and S6 Edge software pages with details of the Marshmallow OTAs for the two devices. They currently run Lollipop, so the update will be very welcome to S6 owners on Verizon; Samsung started to roll out Marshmallow for the S6 and S6 Edge in February, so Verizon isn't that far behind. It does come almost a month after Sprint initiated the update for their S6 and S6 Edge, though.

The update brings all the features you'd expect of a Galaxy device with Marshmallow. Now on Tap is there, as are on-demand permissions, which were both introduced as part of the overall 6.0 update from Google. OnePlus launched the OnePlus 2 last year with Lollipop, and there it has stayed all through the launch of Android 6.0 Marshmallow. Some of the more established OEMs have already gotten 6.0 updates out the door (even those that have to go through carriers). Now it's almost OP's turn to update devices to Marshmallow. There's a beta for OxygenOS 3.0, which is based on Marshmallow. You can install it right now, if you like. Samsung has a bunch of phones spread across a bunch of carriers, and those released in the last year or two need Marshmallow updates. Sprint has begun to roll out the latest version of Android to customers owning three of those devices: the Galaxy Note 4 and 5, plus the S6 Edge+. Sprint customers have a lot to deal with, starting with the fact that they're paying for Sprint service. (I kid, I kid.) But those of them who use a Galaxy S6 or the curvier Galaxy S6 Edge have reason to celebrate, as both phones are being upgraded to Android 6.0 starting today. We have confirmation from multiple users that the OTA files are going out, and Sprint's support pages for both phones say the same thing. 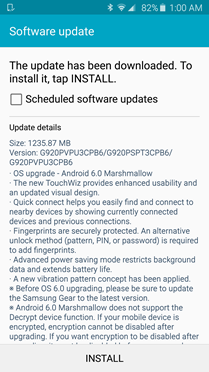 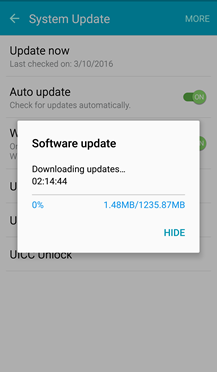 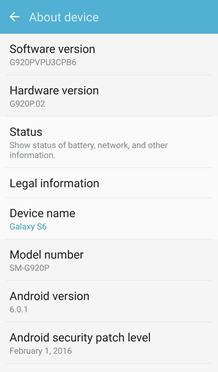 Earlier today (before the Android N deluge), we reported on the Nexus 5X update, which included a few important bug fixes. Now there's a new build for the Nexus 6P that apparently offers the same improvements. It's build MHC19I, and it seems to have some noticeable performance improvements. We're just now hearing about the first instance of an OTA update rolling to the V10, and that's hitting the international variant for users in Turkey.