The time has come for OnePlue One owners to get a taste of the latest version of Lollipop. Cyanogen OS 12.1, which comes with Android 5.1.1, is now heading out to devices. Though, the rollout is starting off small, with only 2% of users getting the goods.

Last week, Google released factory images for every actively-supported Nexus except the Nexus 7 2013 LTE and Nexus Player. These images were for a new build, LMY48I, intended to patch the recently outed vulnerability that was found in Stagefright.

Today, it appears the OTAs are beginning to hit the masses, but be warned, all these do is patch Stagefright. They contain no other fixes of any kind, so if there's some problem with your device you're hoping to have solved with this update, it's not going to happen. That said, we've got links to some of the OTAs below, and will have others as they become available: If you bought a Nexus 6 from Project Fi, and have been waiting for your Android 5.1.1 update, you're in luck. Yesterday, Googler Justine Rivero posted to Google+ that the OTA rollout had begun. You can expect all the fixes included in Android 5.1.1, as well as some Project Fi-specific changes to address connectivity in certain areas of the US. 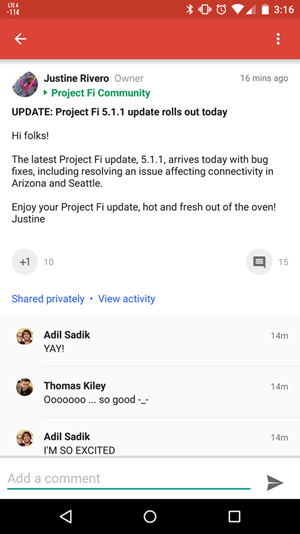 The OTA update clocks in at 92 MB and will only work if you have a Nexus 6 running build LVY47H. This build only shipped on phones that were actually purchased from Project Fi. Considering that the update addressed connectivity in certain areas, anyone on Fi will probably want this.