AllCast was originally released in 2013 as a way to stream photos, videos, and other content to Chromecasts, Apple TV devices, DLNA clients, and more. Developed by Koushik Dutta (koush), likely best known for his work on ClockworkMod and Vysor, the app just received its first feature update in a while. After teasing the Material redesign of AllCast a couple of weeks ago, Koushik Dutta has finally made the updated 2.0 version available for everyone to install, enjoy, admire, and swoon over. And if you're wondering why it looks so good, it's because our own Liam Spradlin had a hand (mouse click?) in giving the app its fresh coat of paint and that is all you need to know. Article over. Nothing left to say. I'm dead serious. Why are you still reading this? Go scroll down to the end of the post and click install, dammit! Everything I say from now on is just pointless gibber-jabbering to fill space.

If there's one thing I've learned from working at Android Police, it's that Artem can be a hound when he wants something done. It looks like Koush Dutta, the developer of AllCast (and much more, as I'm sure you're aware), is starting to get a taste of Artem's dedication to making things perfect, especially after looking at the most recent AllCast update.

First things first (I'm the realest), there's an update to the AllCast Receiver Chrome extension. This brings an improved interface and better support for newer versions of the AllCast Android application. You can also mirror the screen from newer Android devices.

So, you still don't have Koush's AllCast? If you happened to snag all those free Amazon Coins from a few weeks ago, you can officially get this incredibly useful casting app for exactly zero moneydollars. If you didn't jump on the free coins bandwagon, however, you'll have to suck it up and pay five moneys for the full version (via IAP). See, it pays to get free Amazon things from time to time, because then you can get more free Amazon things.

Note: The low rating is due to some issues with IAPs that worked in the sandboxed environment, but not once the app was published.
Read More

It's been a while since AllCast saw a big update, but here one is to brighten your Monday. Koush's media streaming app gains a few new features today, but perhaps his mind has been on other things. The oddly conversational Play Store changelog mentions Game of Thrones in addition to AllCast. I'm hunting for Hodor references in the app, but nothing so far. 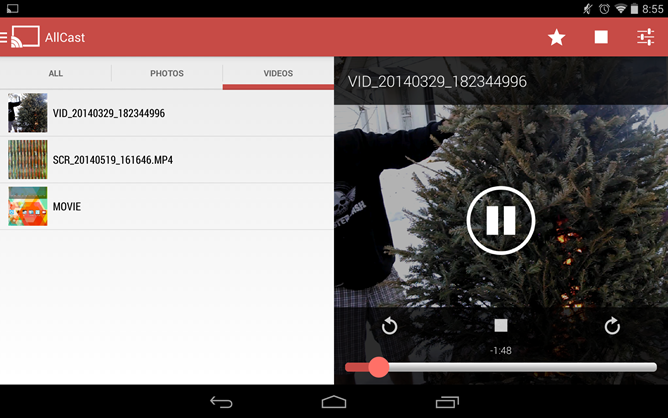 Since his departure from Cyanogen, Inc., Koush has been a pretty busy guy. Yesterday, he released AllCast Receiver to the Play Store, an app that essentially turns any Android device into a casting target, a la the now-extinct CheapCast. Today, he pushed an update to AllCast that brings a couple of new features, including Google Play Music streaming and the previously-teased headphone mode. Check out the latter in action:

This is essentially a jab at Roku's remote, which includes a built-in headphone jack for private listening while watching content on the TV. For the time being, however, Koush's solution only works with AllCast Receiver and FireTV.