The last two Rayman games to grace Android, Rayman Jungle Run and Rayman Fiesta Run, are some of the best examples of the genre on the Play Store. Now the developers are branching out by bringing Rayman back to his platforming roots. The third game in the series, Rayman Adventures, allows for more direct control of the 2D characters as they run around the screen. That makes stages bigger and less linear, encouraging players to explore every nook and cranny. You know, like an adventure. The Sparkle series of games use a 2D layout and a "zen" approach, putting players in the role of a tiny plankton-like creature as it eats, grows, and evolves. The third game steps up the design of both the sea life and the background until it looks like you're playing in a catastrophic oil spill comprised entirely of tie-dye. Eat, grow, and try not to be eaten in return as you swim through the levels.

There's a dedicated "amoeba" sub-genre out there (it works pretty well on touchscreens) but Sparkle 3 Genesis adds some much-needed complexity. Different food sources will make your creature grow in different ways, introducing a crafting element, and twelve different levels and intermittent screen-filling bosses lend structure to an other wise nebulous experience.

This War of Mine is not a fun game. But it isn't trying to be. While other "realistic" war games will hand you a rifle and tell you to take that beach, Private, in This War of Mine a few scraps of meat is a much more important tool for survival. You control three survivors living in a bombed-out house in the middle of an extremely non-specific war zone, trying to scrape together enough materials to craft their way through the war without starving or freezing. 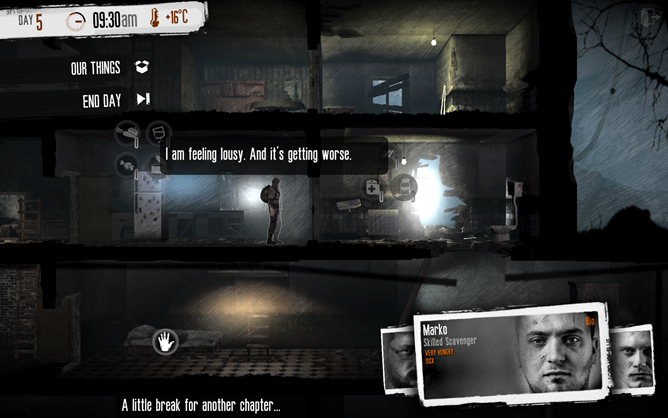 Needless to say, this is not the kind of game that will appeal to those who like to spend their virtual time jumping through colorful Miyamoto landscapes, this is more like a playable version of your great grandpa's stories about what they had to do to get through the war in the old country.

Welcome to the latest entry in our Bonus Round series, wherein we tell you all about the new Android games of the day that we couldn't get to during our regular news rounds. Consider this a quick update for the dedicated gamers who can't wait for our bi-weekly roundups, and don't want to wade through a whole day's worth of news just to get their pixelated fix. Today we've got several PC and console pilgrims including Hotline Miami, War Thunder, and Always Sometimes Monsters, a new Portal-inspired Zen Pinball table, a mashup of tactic, RPG, and city-building, and standard platformers and puzzlers.

Wait, don't close that tab just yet. Retry, teased back in May, actually has some surprisingly solid gameplay elements. For one thing, you move your plane forward with careful taps that both tilt it up and activate the propeller, making real "flight" possible (instead of insane sine waves in the air).

All dogs are time travellers. On a technical level, anyway: they move around through three dimensions while progressing through the fourth at a constant rate. But the charming hero of the adventure game Doggins has one less dimension to travel through, so he makes up for his 2D affliction by blasting himself backwards in time. If you want to see how (not to mention why) you'll have to play the game, now available for four bucks on the Play Store.

Doggins starts off as it means to go on: weirdly. As the game begins a monocled squirrel most pointedly does not invite you to "a grand celebration of villainy" at his diabolical party tree.

Enterchained looks like a standard 2D brawler, but it's got a trick up its sleeve.

OrangePixel's original Groundskeeper was more of an experiment than a full game, an endless survivor-shooter in the company's typical old-school 2D style. The sequel retains the look and feel, but everything has been expanded: there's now a full story behind the tiny compartmentalized levels, you have access to a staggering amount of weapons, and the graphics and on-screen action have been given a considerable boost.

The game features the developer's usual calling cards: retro basics dialed up to 11. At the core it's a Contra-style shooter, but the sheer chaos of dozens of enemies and attacks on screen at once combined with impressive speed means it also has a bit of "bullet hell" DNA as well.