One of the biggest criticisms about HTC smartphones as of late has been about their prices. For instance, $749 is kind of a lot for a U Ultra when you can get a Galaxy S8 for less. But with HTC's Summer Sunset Sale, you can chop a couple hundred bucks off the MSRPs of the U Ultra, the 10, the Under Armour HealthBox, and more. Craving some juice? How about some lemon juice? Well, I've got ZeroLemons to satiate you and your phone. I know that sounds like a bad deal, but ZeroLemon actually makes really good products that help you avoid any situation in which your phone could turn into a useless juiceless lemon. And today's deals get you some of the best value for your bucks from the company's portfolio.

First up is the 10,000mAh solar battery charger that we've seen sit at $26 at its lowest. It has 2A and 1A output ports so you can charge one phone or accessory faster than another, although this isn't Quick Charge.

It's the moment you've been waiting for. Google just announced the Nexus devices are getting OTA updates to 5.0, and now the full system images have been posted on the Google Developers site. With these files, you can flash your device back to stock even after you've done unspeakable things to it.

First up, the new app will allow users to "like" posts, photos, and pages without an internet connection. So if you're scrolling through your stream but don't have a data connection, no worries - just hit the "like" button and forget about it. The action will of course sync once you get signal.

Do you find that your devices constantly need more juice while you're out and about? There's a good solution for that quandary: a portable charger. As a day-one Verizon Galaxy Nexus owner, I quickly learned how important always having one with me is, and now I never leave home without one (even though the N4 is extremely battery efficient by comparison). If you're in the market for just such a charger, Amazon has a couple of good deals going right now for EasyAcc's 10k and 12k mAh chargers, at $28 and $37 respectively.

A few months ago, Microsoft announced the SmartGlass app for Xbox, a companion application that allows you to navigate and control your console from your phone or, up until recently, 7" tablets. Now, version 1.5 has rolled out that adds support for larger slates. Including 10" devices like the Nexus 10, which is kind of great. 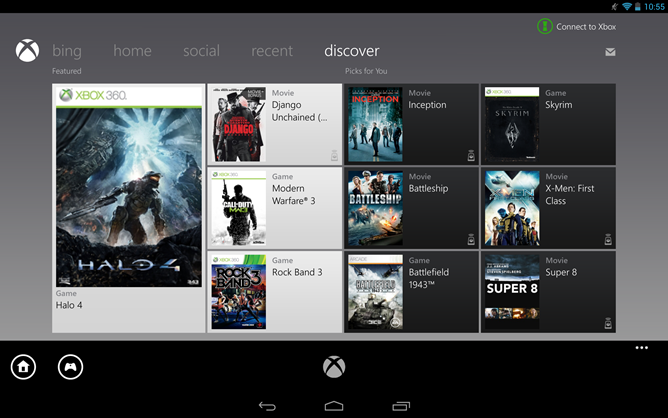 On a larger tablet, the UI actually doesn't look much different from the interface on the TV itself, so it's extremely intuitive. Also, this update brings an always-on state, so your device won't shut off while you're using the companion app. SmartGlass is free on the Play Store and the update is available immediately.

Autodesk has a fantastic record of powerful, well-built apps. Continuing the pattern, the Pixlr Express makers today released SketchBook Ink, a (you guessed it) sketching and line work app specifically built for tablets 7" and above.

While SketchBook Ink is perhaps not up to handling a professional illustrator's full time workflow, it's a versatile tool with functionality that's suprisingly sophisticated for a mobile app. Ink's got a full screen workspace built on a "new resolution independent engine," with seven preset ink styles, a wonderful color picker (with RGB sliders, a color wheel, and a block for shade selection), layering options, and plenty of options to explore.