If you're at all into TV, you've heard of Hulu. Chances are, you're watching something on Hulu right now on your PC, phone, XBOX360, Wii, Roku, PS3, iPad, 3DS, or any of the other supported devices. The list is pretty long, but until today it had one glaring omission - Android tablets. Sure, some tablets, like the Kindle Fire, HTC Flyer, or the Vizio VTAB, were already supported, but they were running Gingerbread and didn't have a proper tablet UI.

Woot.com has done it again, offering another great deal on an Android-powered piece of mobile tech. Up for grabs this time is a refurbished 8" VTAB from Vizio.

The VTAB is a budget-friendly slate running Android 2.3 Gingerbread (with Vizio's V.I.A. Plus interface). Woot is offering the VTAB, along with a handy folio case, for just $159.99 plus $5 shipping, which is a cool $170 off Vizio's list price. 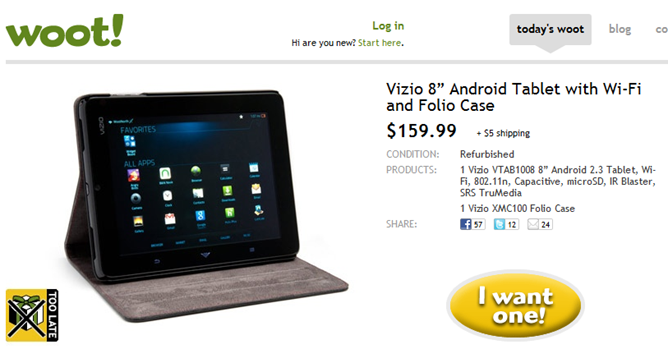 Here's a more complete look at the VTAB's specs:

Remember that weird little Vizio tablet that was released back in July? Yeah, the one that works as a remote control for your Vizio Google TV. I feel like I'm not alone in thinking that it was slightly under-spec'd and drastically overpriced at launch, even if you can justify its use with your TV. Fortunately, Amazon has taken care of the latter issue by dropping the price down to a much more reasonable $199 with free shipping.

Update: If you're not into the idea of dropping $379 on this, then you can per-order it from Costco for $50 less ($329). Similarly, Amazon has the pre-order priced at $350, which is still a bit cheaper than ordering direct from Vizio.

If you've been counting down the days until Vizio releases its 8-inch Android-powered tablet, then you can breath a sigh of relief, as pre-orders are now live. The tablet itself is $379, but you can drop $20 extra and get a 16GB SD card and folio style case to go along with it.

CES hasn't even started yet, but we're already getting word of a newly announced Android tablet - as well as a handset - from television manufacturer Vizio. The specs are nothing to scoff at, either, as the VIA Phone can certainly hold its own against any phone on the market today:

The VIA Tablet, on the other hand, while definitely not underpowered, might be disappointing to those who are awaiting a dual core tablet:

The devices are also running a custom UI called VIA Plus, which Matthew McRae, Chief Technology Officer at Vizio assures us will be found on any future smartphones, tablets, and TVs from the company.