Credits where credits are due. Sony had promised a comprehensive Android 5.1 roll-out to the quasi entirety of its line-up from the past years, and the company is steadily fulfilling that promise. After updating the Xperia Z3 and Z2 series of phones and tablets, it's time for older devices in the Sony ranks to join in on the Lollipop action.

According to Sony's official PR team, the Android 5.1 OTA will start going out to the original Xperia Z series and the T2 Ultra.

The new recovery is available on the Xperia Z1, Xperia Z1 Compact, Xperia Z Ultra, Xperia T2 Ultra, Xperia T3, Xperia M2, and Xperia E3, all of which need to be unlocked at the bootloader level and running the latest "generic" software from Sony.

If you've been following Google's Android 5.1 rollout, it's no secret that the release to GPE devices is well underway. So far we've seen the stock Android variants of the Moto G, LG G Pad 8.3, and HTC One M8 get the update, and now it's time for Sony's massive Z Ultra GPE to have its turn in the sun. 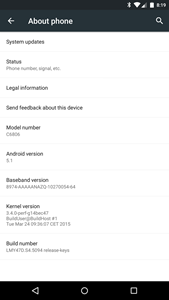 The build is LMY47D and it's not entirely clear yet how big the OTA is. We don't have a link to the actual ZIP file yet, but once we do, we'll post it here.

Sony's Live on YouTube app, which allows you to offer live streams from your Xperia handset, has updated to bring more devices into the fray. First off, sorry, but this is still Xperia-only and is likely to stay that way. The other key feature addition is the ability to broadcast in full HD when the camera and local upload speed allows it.

The Z Ultra is the second Google Play Edition to get Lollipop, right after the G Pad 8.3 from LG.

It made its exit from the Play Store device section a few months ago, but there are still some Google Play Edition Sony Xperia Z Ultras floating around out there. Expansys has the device in stock for just $269.99, but it's not exactly new.

Google officially pulled the Xperia Z Ultra GPE from the Play Store a few days ago, but it looks like stock wasn't completely gone. The device has shown up on Expansys USA for just $349.99. That's $100 less than Google's last price for it. We don't know how long it's going to last, but Expansys says it has more then 100 in stock right now. 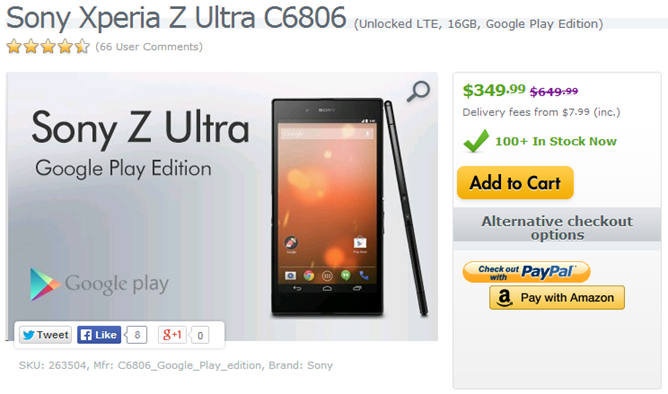 The remaining three phones are the One M8, Moto G, and Galaxy S4. The S4, though, has been continuously out of stock for around three weeks now, so its demise seem inevitable, as well. A long-rumored Galaxy S5 GPE device has yet to materialize, though, even after months of the phone being on the market, and the introduction of the altogether unexpected Samsung Gear Live Android Wear smartwatch.

Outside of Google, it looks like Sony is the first company to start pushing 4.4.4 to its devices, beginning with the Z1, Z1 Compact, and Z Ultra. While it's only a very minor update, it still says something about Sony's drive to push timely updates that it's the first to get 4.4.4 out the door to consumer devices.

Included in this software

There are many improvements in this upgrade for your Xperia™ smartphone, some examples are:

The update is currently only rolling out in Europe, but it will likely follow in other regions fairly soon.