Anyone who's been keeping up on the Android blogosphere this year will know that Samsung managed to keep a pretty tight lid on the Galaxy S III prior to its release - we didn't really see any credible leaks up until a few weeks before the official announcement. And now, Samsung, in an apparent attempt to let the world know it's practicing Apple-level secrecy, has let us in on the deets of how it hid its flagship from the media's prying eyes.

Because Apple and Samsung are still in litigation over the Galaxy Nexus, Apple could attempt to stop shipment of the GSIII using a temporary restraining order (TRO).

If you're on the regional carrier C Spire and have been jealous of all the Galaxy S III banter, you can lay that jealousy to rest. C Spire just announced that it will be getting the Galaxy S III as one of the initial devices to run on its upcoming 4G LTE network.

The device will launch with identical specs to the other U.S. carriers:

Unfortunately, pricing and release date information aren't yet available, but the company plans to launch its LTE network in 20 Mississippi markets beginning in September, and the GSIII will most likely be its flagship for the launch. 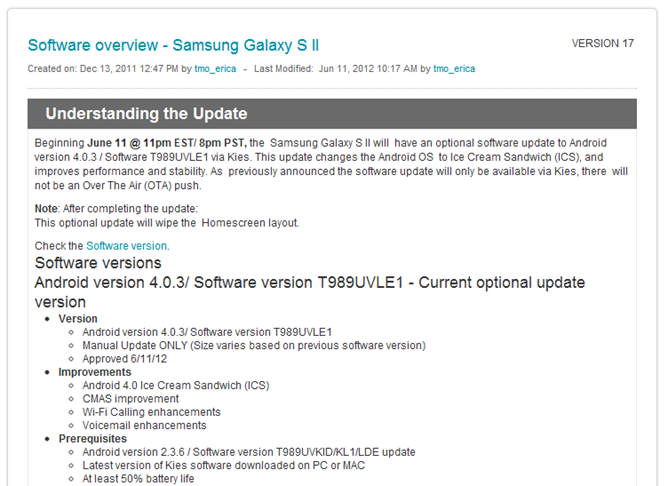 The update is just slightly behind the 4.0.4 that other devices have been receiving, but users probably won't be complaining too much.

Read More
This is the latest in our Weekend Poll series. For last week's, see Is A Carrier Move To Data-Only Service A Win Or Loss For Consumers?

Just a few weeks ago, we asked you what phone you would buy if you had to choose one today - the HTC One X, or the Samsung Galaxy S III. Surprisingly, people were pretty closely split, with the tally as of writing 56% SGSIII, 44% HOX.

Although it isn't a new feature, one of Samsung's software perks with the Galaxy S3 is the inclusion of 48 GB of free space in a Dropbox account, an offer that lasts two years. Unfortunately, according to an official Dropbox support page, some U.S. users won't have the option to take advantage of this free space.

AT&T and Verizon have chosen to opt out of this promotion, though their reasoning is unclear.

Apple and Samsung's ongoing litigation in California federal court has become something of a three-ring circus. Back in December, the presiding judge denied Apple's request for a preliminary injunction against a wide variety of Samsung products.