Here's a bit of good news for all of you who have an unlocked (global) Samsung Galaxy S II here in the U.S.: Ice Cream Sandwich is being pushed to your device right now. This makes the global GSII the first of the GSII family to officially get Ice Cream Sandwich in the U.S., as none of the three American carriers that offer the phone have begun sending the update yet.

The CyanogenMod team has done it again, bringing their CM9 build for AT&T's variant of the Samsung Galaxy SII to nightly status, and releasing the build to the CyanogenMod mirror network just yesterday.

The build actually released just before news that a seemingly official (and fully TouchWiz-ed) build of ICS had leaked for AT&T's SII, so SII owners have a couple of great options to satisfy their Ice Cream Sandwich cravings.

Some owners of the original AT&T Galaxy S II may have been left feeling unwanted when Ice Cream Sandwich leaked for the GSII Skyrocket a couple of days ago, but now they have their very own version to download and play around with.

This morning, RootzWiki posted a leaked built of Ice Cream Sandwich for the original Galaxy S II, and looking at the build.prop file alongside the screenshots of the build, it seems to be the real deal from Samsung, just like the leak for the Skyrocket.

Seeing as how the HTC Vivid officially started getting its update to ICS this morning, AT&T thought it would be the best time to go ahead and tell everyone else who will (and won't) be getting the update as well. While this list holds few surprises when it comes to devices that made the cut, there are a few devices seemingly absent:

Samsung, a company once known for taking far too long to release updates and source code, has really done a 180 degree turn-around over the last several months. Updates are now coming in a more timely manner, and source code sometimes hits the scene before the device it supports is even released.

Keeping up with its current approach of timeliness, Samsung has now pushed the Ice Cream Sandwich kernel source code for the international version of the Galaxy S II, which just started receiving the update one week ago.

Samsung announced just last night that the on-again-off-again Android 4.0 update would begin rolling out to the Galaxy S II in several European markets and Korea, and now we're hearing the date of March 19th for the UK variants of the device -- with carrier approval, of course.

Further dampening the excitement, Samsung also notes that "the availability and scheduling of the software update and specific models upgradable to Android 4.0 will vary by market and wireless carriers' requirements."

We'd heard whispers that the Galaxy S II might be getting an update to Android 4.0 on March 10th. After the announcement was immediately yanked from Samsung's site, we were skeptical. It turns out those suspicions were confirmed tonight via Samsung's official Twitter account. The date was errantly posted by Samsung's Filipino arm.

While the SGSII may not be receiving its update tomorrow, this does at least let us know that Samsung is working on it. 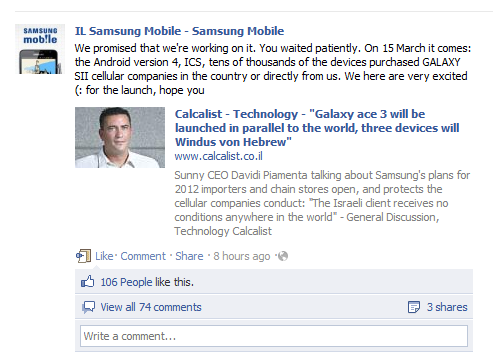 Fortunately, Samsung Israel has taken to Facebook to announce that versions of the device in Israel - both unlocked and carrier-branded - will receive the update on March 15.

Regional carrier U.S. Cellular just announced its own variant of the Samsung Galaxy S II, which is basically a clone of Sprint's Epic 4G Touch in terms of spec:

Unfortunately, the device is not one of U.S.