You may have already heard whispers about a shortage of semiconductors affecting the technology and automotive sectors, but it looks like the worst is yet to come. According to Samsung CEO DJ Koh, this "serious imbalance in supply" could lead to some tough decisions in the next business quarter. Chief among those is the call to scrap this year's Galaxy Note flagship.

Samsung's Galaxy Note series offers some of the most expensive phones around, but 2020 hasn't been super kind to the high-end smartphone market. Earlier this month, rumors started swirling that Samsung was considering crumpling up its Note line in favor of focusing on foldables. Now the company is rebuking the rumor mill, claiming that the Note's retirement is not in our immediate future. Samsung made history back in 2011 when it unveiled the Galaxy Note — a huge (well, at the time) 5.3" phone with an S Pen stylus included. Since then, it's become synonymous with Samsung's top-of-the-line flagship experience. But next year Samsung is poised to set history in a different way. Grab a tissue, because 2021 may see the Galaxy Note line tossed into the trash can. Samsung kicked off this month's security patch rollout last week with the budget Galaxy A50. Within days of that release, some of its recent S Pen-clad flagships are also being bumped to the latest Android security level. Alongside their international variants, the US Note20 and Note10 series have started getting the October update, starting with the unlocked models. Samsung is offering its flagship Galaxy Note10 series of phones at steeply discounted prices—so long as you have an eligible trade-in device. The company's now increasing how much it's willing to pay out for your existing handset, making even older phones like the Galaxy S8 worth as much as $350 towards the Note10—bringing the new model down to $600.

Here's a quick list of the affected devices, running the Exynos 4210 and 4412 chipsets:

The CyanogenMod team's reason for the lowered level of support includes "various issues surfacing from the binaries and sources we have to work with."

Owners of the original Galaxy Note in the great white north are getting a little present today – a brand new (year old) version of Android is coming to their devices. Samsung has announced via Twitter that owners will be getting the update starting today on Bell, Telus, and Rogers.

The update is going out over Samsung's Kies program on all carriers, but it looks like OTA updates are occurring as well. Telus lists instructions for updating to Android 4.1.2 via the phone's update menu, as well as Kies.

Update: The word on the street is that this update is already available through Kies. Hook up and get it! 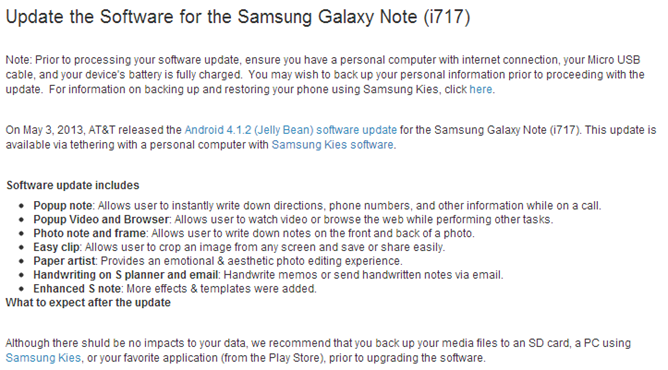 While the Android version bump is the same, however, everything else about this one is quite a bit different. Here's what you an expect post-update:

It's been a week or so since Samsung decided to release some source code, so I guess it's time for a fix. The company just dropped the Jelly Bean source for the international variant of the original Galaxy Note, which received the 4.1.2 update back in mid-February.

You know the drill: download, tinker, enjoy. Hit the link to grab it.