Enterprising user rhcp0112345 over at XDA-Devs (where else?) has come up with an on-phone, one click root/unroot for the Samsung Galaxy S line of devices. It has only been tested on his Vibrant, but it should work across the line of devices.

There are no real details on the process yet - but it seems that you just install the app, hit “root” or “unroot,” and reboot your device.

Damageless and TrevE have been hard at work for the past few weeks porting Froyo to the EVO. On July 24th, they released the first DC 3.5 (Froyo) beta. Today (in the wee hours of the morning) they released their final build - and users seem to be loving it. The guys have also set up a Google Code page for DC, which provides a wiki and bug database, in addition to the usual news/latest version page.

On June 23, Eric Schmidt told the world that Google was tracking 160,000 Android devices sold per day – and just a month before that, they were at 100,000/day. Today, he revealed that 200,000 Android devices are sold every day. It’s truly amazing, especially considering the scope of other devices – as much as I hate to do this, I’m going to drag in the iDevices, and quote the figures I stated in June:

The important caveat there is that figure excludes the iPhone 4 launch, but I’m not looking to draw a line from Android to iOS here – rather, I’m looking to establish a scope. 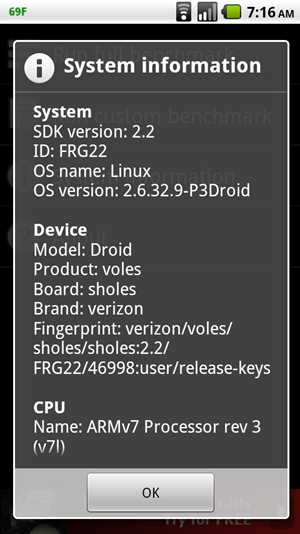 The 'Not Pink' Pixelbook Go is now available starting at $849 Someone at Motorola’s marketing department is clearly convinced that letting out photos of forthcoming devices is the very best way of gathering hype.

The latest in the series is the Motorola Sage MB508 (or should that be SAGE?), a MOTOBLUR-running mid-range device with a landscape QWERTY keyboard and Android 2.1. Expected to land on AT&T as the replacement for the Backflip, Engadget's tipster says he has had his for over a month now, so it would seem that the phone is in the final stages of testing. Read More

Android dev TGA_Gunnman has been added to Amazon’s hit list for this latest in a litany of single-click phone unlocking methods. In spite of the impending lawsuit (not really), his Samsung Galaxy S One-Click Root program does exactly what it says on the, err, titlebar.

There are separate versions for the Captivate and Vibrant, so make sure you get the right one. All users have to do is download the program - currently Windows only - run it, and click the One Click Root button with their Captivate/Vibrant connected up to USB.

A common complaint leveled against Android is that it’s too technical or too difficult to use. This is especially the case when it comes to hacking around on your phone. While the command line may be the interface of choice for some Android users, it’s not exactly the most user friendly of solutions. Enter one-click rooting, something that iPhone jailbreakers should already be familiar with. One click. Can’t get easier than that, right?

This is exactly why I love Android so much and the awesome developer community around it. Case in point: the official  Android 2.2 update for the EVO 4G has already been rooted by netarchy over at XDA-Devs. Yea – the update that was just released yesterday… pretty impressive stuff. Be forewarned, though – the update may not play nice with the previous (non-final) update that was released.

You might be able to just flash this over the leaked ota, but I advise doing a full wipe before flashing just to be safe.

No longer should Nexus One owners be jealous of their HTC Desire brethren. We’ve seen High-Def on the N1 before, and thanks to the continued hard work of Charan Singh and Cyanogen over at XDA-Developers, 1280 x 720 recording has finally come to an AOSP version of Froyo 2.2. The update.zip will only work for CyanogenMod versions greater than RC2, but it is expected to be ported to the popular LeoFroyo ROM and, who knows, maybe even the stock version of N1 Froyo in the future.

What a great day for Motorola Droid owners - your Froyo update that you've been patiently waiting for is finally here. You can upgrade your ESE81 (that's your old Éclair) to what is now called FRG01B (this is your Froyo) using the link below.

It is unclear yet whether the upgrade is showing up when you ask the phone to update in Settings > About > System updates but we have preliminary reports that it is not.