If you've been using an LG Optimus Pro for the last few months and wondering when you'll be able to ditch the manufacturer's custom skin, wonder no more. LG's super-sized flagship is the latest device to grace CyanogenMod's ever-growing list of official builds. Two nightly ROMs based on CyanogenMod 10.2 (Android 4.3) are already available from Get.CM.

In case you've forgotten, the Optimus G Pro is a bigger, beefier version of the Optimus G intended to go head to head with Samsung's Galaxy Note family.

If you've wanted a phablet in white, or just any smartphone larger than 5 inches, we would forgive you for thinking that the Galaxy Note II was the only option out there - or, if you've been keeping up, the recently-released Galaxy Mega. But here's the thing, there are other massive phones available, such as the LG Optimus G Pro, and as of today, it's also available in white.

It's a good time to be in the market for an LG Optimus G Pro from AT&T. Last week, the network dropped the off-contract price of the powerful handset down from $549.99 to $439.99. Now Amazon has bested that price by over $20. For just $414.96, this handset can be yours to use free of the confines of a two-year contract. I may not be in the majority with this opinion, but I find it's the only way to live.

If you've got a hankering for a beefy smartphone rocking a new Snapdragon 600, consider the AT&T Optimus G Pro. Ah, but the contract, you say. Well, AT&T has just dropped the off-contract price to $439.99. It used to be $549.99. All the contract deals have remained the same, but eBay doesn't even sell the G Pro as cheaply as AT&T does now. 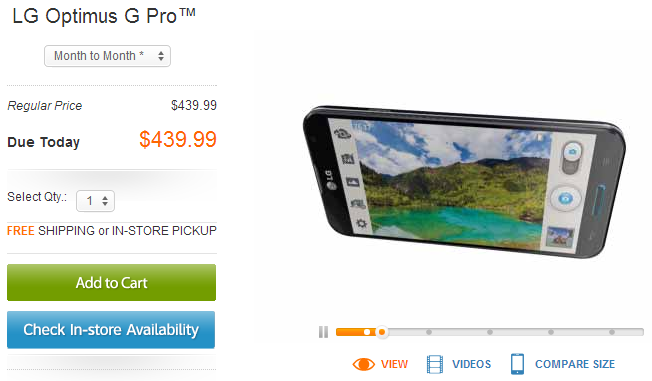 This is the AT&T-branded Optimus, remember. That means some AT&T junk on the device.

Locked bootloaders can be a real drag, but there's usually some way around it. In the case of the Verizon and AT&T Galaxy S4, Dan Rosenberg released the Loki tool to bypass the locked bootloader and execute custom kernels. This developer-focused tool has been a hit with its intended audience, and now it has added support for LG devices.

Loki can be obtained from GitHub with all the necessary code and documentation.

While LG originally announced the Optimus G Pro "Value Pack" back in March, at the time it was in reference to the Korean version of the device. The G Pro has since been released on AT&T Value Packless, but it appears that's finally changing: LG has officially announced that the VP upgrade will be hitting AT&T G Pro handsets very soon. While it sadly does not include an Android version bump, it does add a host of new features.

If you're in the market for a gigantic, tablet-like smartphone that doesn't start with the word "Galaxy," you'd be hard-pressed to find a better candidate than the LG Optimus G Pro. And if you want it on AT&T, you won't find anywhere that has it cheaper than Amazon. The 5.5-inch phone is just $49.99 for new contact signees and returning customers whose 2-year re-up has come, with free two-day shipping to boot (you don't even need Amazon Prime).

Most Android phones have big batteries these days, but that doesn't mean they always have enough juice for today's go-go smartphone user. Luckily, ZeroLemon has just started selling gigantic batteries for the Samsung Galaxy S4 and LG Optimus G Pro. Sometimes form has to take a backseat to function.

When a moderately huge phone just won't cut it, there's the enormous LG Optimus G Pro. This 5.5-inch monster is LG's newest Android device and it can be yours for just $79.99 through Amazon. That's even lower than the Fry's deal last month for $99.99. 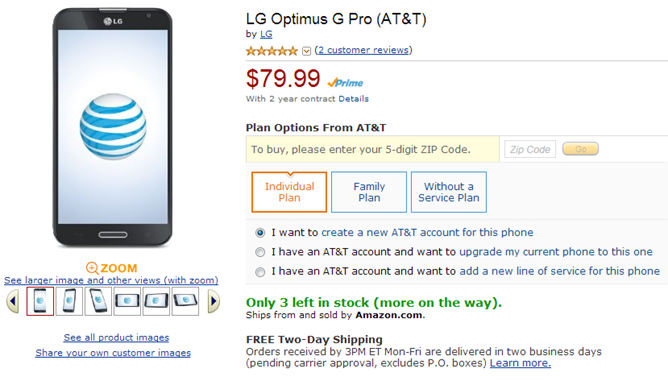