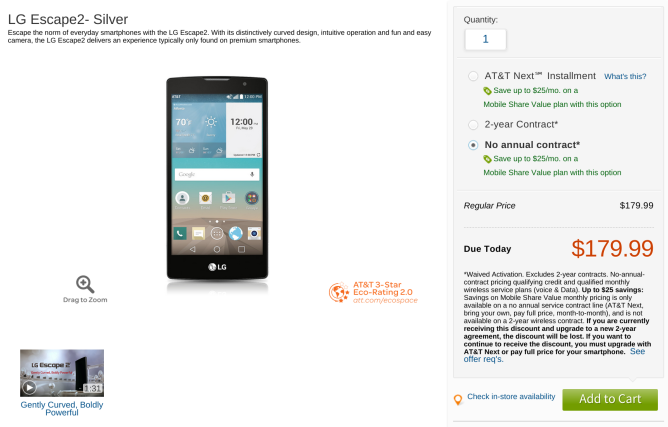 Like the original, the LG Escape 2 comes with a decent set of specs for the price. Buyers get a 4.7-inch screen with a 1280 by 720 resolution. On the inside, there's a 1.2GHz quad-core Snapdragon 410 processor, Adreno 306 GPU, 1GB of RAM, and 8GB of storage (supplemented by a microSD card slot).

AT&T announced on its official blog that the LG Escape will be receiving an update to Android 4.1, and that said update should be headed to devices starting today. The first release of Jelly Bean includes things like expandable rich notifications, Google Now, and possibly some Project Butter smoothness enhancements (all LG handsets I've seen have them, at least).

AT&T's DriveMode app is also included in the update, so there'll be another piece of carrier bloat (arguably of the less than useless variety) in your app drawer.

Budget on AT&T just got a little better, as the carrier has announced the LG Escape, a 4.3" entry-level Ice Cream Sandwich phone that will be available next week online and in stores. Here's a quick breakdown of the specifications:

While it's not the most exciting phone ever, at just $50 on contract, it's probably going to get a lot of attention at AT&T's retail stores (as most budget phones do).