The EVO View 4G will be joined by a few other random devices, including the Blackberry Playbook and the phone that will not die - the EVO 4G.

HTC is continuously adding phones and tablets to its official bootloader unlock page, and a couple of new devices have made their way into the now-unlockable arena. The EVO View 4G is one such device, as it now joins its Wi-Fi only brother, the Flyer, in the world of open bootloaders. Also joining the mix is the T-Mobile myTouch 4G Slide, the first device from the myTouch family to make its way onto the portal.

Read More
Update 12/22: Guess what? Yeah, It's back again. Just in time for Honeycomb.
Update 12/12: If you missed this opportunity the first time around, the gods have shined upon you. It's back.
Update: Hope you grabbed this deal while it was live, because it's gone now!

For anyone holding out on buying the HTC EVO View 4G on Sprint, the opportune moment just arrived. Over at eBay's Daily Deals site, the View 4G is going for a mere $240 with no contract - a solid $160 off the current Sprint price (it doesn't even look like you can get it without a 2-year contract from Sprint).

Sprint's variant of the HTC Flyer - the HTC EVO View 4G - is finally getting a taste of Honeycomb, bringing it up to par with competing Android tablets.

Originally launched with a heavily customized version of Android 2.3, the View 4G is now receiving an over-the-air update to Android 3.2.1. As you'd expect, the update brings Honeycomb to Sprint's version of the Flyer, featuring HTC's Sense overlay, and on-screen buttons which replace the View 4G's capacitive keys – here's the full changelog for this 217MB update:

This update adds Android 3.2.1 (Honeycomb) and a new virtual and holographic user interface.

I'm starting to think that HTC has an overwhelming amount of overstock when it comes to the EVO View 4G - we've already seen this thing go on sale at least three times in the past week. If you happened to miss it on every one of those occasions, wipe those tears away, because it's back again.

This time it's on Daily Steals, and it's going for the cheapest price we've seen yet (only by a few bucks, by hey, cheaper is cheaper, right?).

Well, looky at what Engadget got a hold of - a leaked internal document from Sprint's Reward Me site that just so happens to show a possible release date for the HTC EVO View 4G (the WiMax version of the HTC Flyer). Have a look: 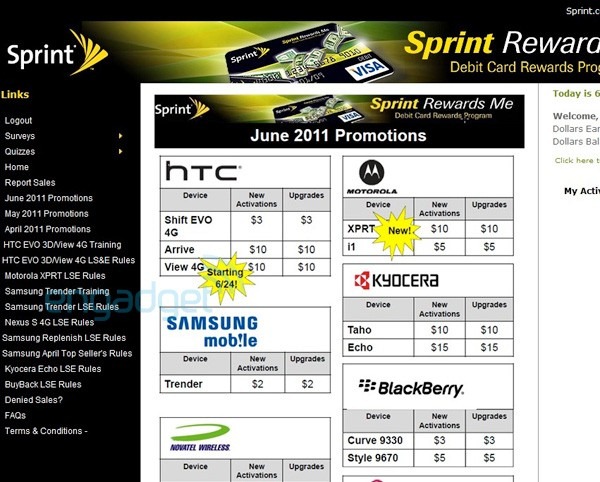 As you can see, the View 4G should hit shelves in on June 24th (and no, that's not the price listed beside it

), which happens to be same date that the EVO 3D is rumored to be landing on the Now Network as well.