Update: Sprint's posted the official changelog, here it is:

According to a photo taken of an internal Sprint page by an anonymous tipster, the EVO 4G LTE is finally scheduled to receive an update to Android 4.1 - starting tomorrow.

Now, we should clarify two things. First, this tipster isn't one we have particular reason to consider reliable, though there is a link to DARA in the leaked image, an internal Sprint web portal. It's certainly a real possibility that this is from inside Sprint.

If you're convinced that LTE is the way to go and aren't interested in picking up the Nexus 4, then Amazon Wireless is running a couple of deals right now for those who have been considering making the jump the Sprint. 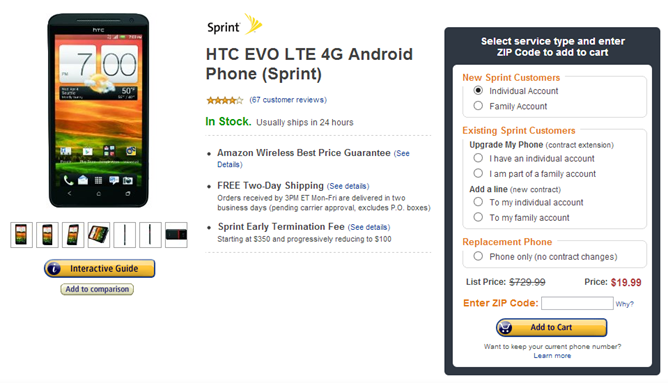 First off, the HTC EVO LTE is now only $20. Twenty. Not a bad deal for such a solid phone, especially if you plan on installing CyanogenMod 10 on it.

You likely noticed our coverage regarding the arrival of official CyanogenMod (experimental) nightly builds for, among other devices,  HTC's EVO 4G LTE. As someone who's lived with the EVO LTE for several months now, this was big news.

Normally, we steer clear of covering the majority of custom ROMs, as development for many Android devices runs at a fast and furious pace, and coverage can quickly become dated. The improvements CyanogenMod 10 offers, though, especially over Sense on the EVO LTE, are certainly worth coverage.

Owners of Sprint's One X-inspired EVO 4G LTE may be interested to know that they can expect a minor software update to begin rolling out over the air today. The update, which carries software build 2.13.651.1, brings the device up to Android 4.0.4 with Sense 4.1 on top, meaning the menu bar fix the HTC One X got a few weeks ago has arrived, among other things.

The update's other offerings include a fix for random browser closes, a minor Bluetooth fix, an updated version of both Google Wallet and Sprint's Visual Voicemail, and an LTE scanning improvement that should help users better find Sprint's burgeoning 4G network.

Since the debut of Android 4.1 Jelly Bean back at I/O, everyone has been clamoring for CyanogenMod 10. With the addition of each new device to the list of those with official nightly support, hopeful users of flagship handsets like the HTC One X and Samsung Galaxy SIII wondered when their day would come. While most variants of the SIII have already received nightlies, the US Cellular variant (d2usc) joined that list last night, along with a few other devices.

If there were ever a time in your life when the thought "you know, I should switch to Sprint and get the EVO LTE" crossed your mind, now may be the best time act on it: it just dropped to a penny on Amazon Wireless. A freakin' penny.

Amazon Wireless wants to you have this phone so badly, they're willing to hand it right over - so long as you don't have a problem with committing to The Now Network for the next couple years.

It's nothing new to see Amazon Wireless undercutting the brick and mortar mobile phone shops, but this slew of newly announced deals is fairly good. Some of the top selling phones, several of them still brand new, are on sale for anyone signing up as a new customer.

The Motorola Droid Razr is the oldest phone among the bunch, having come out late last year. It is also the only Verizon deal being offered; although $0.01 isn't bad.

It may have taken over a month longer than the international version, but HTC has finally released the kernel source code for T-Mobile's version of the One S. HTC has offered no explanation for why the US model's source code was delayed for so long, but perhaps this means that the AT&T One X will see its kernel source released at some point.

They also released the kernel source for the EVO 4G LTE.