The popular in Europe HTC Desire handset is going to be heading to the US in August, HTC officially announced this morning via twitter:

The device will feature the same specs as the European version: 1Ghz Snapdragon processor and Android 2.1 with Sense, HTC's PR rep Ricky tells us.

The only caveat in this announcement is the carrier choice - Desire will be going to regional carriers only, which means the big 4 - Verizon, Sprint, AT&T, and T-Mobile - will not be involved.

Yesterday, we reported on an exciting announcement for all HTC Desire owners - @PaulOBrien managed to root the device and promised detailed instructions to be posted today.

Well, he's backed the promise up with action and as of this morning, full instructions have been posted.

Paul notes that HTC made it much harder to access key partitions and write any data to them, compared to, say, the Nexus One. This made the process of rooting extremely complicated and left it a quite crippled (he's still working on uncrippling it).

HTC Desire didn't last long - it was rooted (see here for an explanation and benefits of having your Android phone rooted) today by @PaulOBrien, the founder of MoDaCo.com - a forum dedicated to rooting and customizing mobile devices, similar to xda-developers.com.

Paul, who had claimed he was confident he could root the Desire earlier this month, was away for about 2 weeks. His return today was accompanied by the following photo, clearly showing a program called Superuser Permissions present on his Desire: 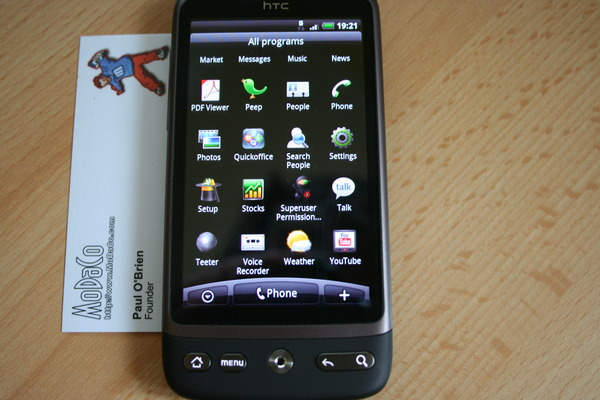 While the root method is currently not yet available, Paul promised to post it by tomorrow, Wednesday, April 28th.