You've been able to tell Android to place calls by voice since time immemorial, but it has gotten a lot smarter over the years. Now, with OK Google commands, you can place a call without even touching the phone. It only makes sense you could activate the speakerphone in that situation, and indeed you can. At some point, Google added the ability to begin a call on speakerphone with only a voice command. Last weekend I asked you: Nexus 6P or Nexus 5X? Well, technically I asked you Nexus 5X or 6P, but whatever. But they weren't official yet! Now they are.

Personally, I'm a 5X man. After holding it, touching it, and generally being near it, I love the design of this device.

So that thing you want is out of stock on the Google Store? Bummer. I suppose you'll just have to refresh the page for days on end until it's available for order... or maybe not. Google is poised to add a waitlist feature to the Google Store, which we spotted by fiddling with the site's JavaScript. It's not live yet, but everything appears to be in place. 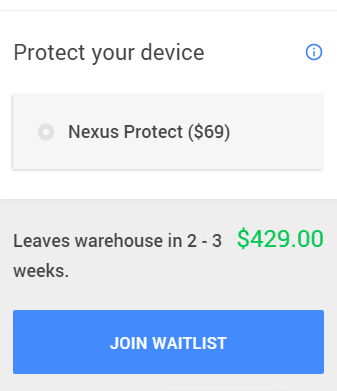 Chromecast Audio is a very simple product, and that’s probably the best thing about it from a consumer’s standpoint. You plug it in to power and then into an audio output source like an A/V receiver or a powered speaker. The Chromecast Audio supports either standard stereo audio cables or optical via a mini-digital connector. From there, just open the Chromecast app and get the device set up on your Wi-Fi network. That’s it - you’re done.

Now, any cast-enabled device within a reasonable proximity of the Chromecast Audio can tell it to play audio, regardless of whether it is on your Wi-Fi network, just like Chromecast.

If you have a Chromecast or Android TV, you've probably noticed the one big glaring hole in content on those devices: Amazon Instant Video. Now, it seems more unlikely than ever that these devices will be getting AIV support, because Amazon is apparently preventing sellers on the US site from listing them altogether, and will remove all existing listings for the devices on October 29th. An email appeared on reddit late last night purporting to be from Amazon is below:

Over the last three years, Prime Video has become an important part of Prime.

After years of fighting in the courtroom, Google and Microsoft have decided that enough is enough. In a joint statement, the two tech giants announced that they have reached a settlement and are ending the 20 or so lawsuits underway in the US and Germany. Last year's lineup aside, a good balance of specs and price has become a hallmark of Google's Nexus line, but this year not everyone around the world will be getting the same bang for their buck.If you live in Europe, you may end up paying over 40% more for a Nexus phone than stateside, and you won't receive Google's $50 Play credit either.

We've gathered the prices from several countries for both Nexus phones, as well as the Chromecast, and arranged the numbers out in the table below for your viewing pleasure. The prices in each cell are shown in US dollars first so you can sort each column to compare figures. There

Google announced a few notable additions to the Photos app at its Nexus event yesterday, and a new version of the app is already rolling out. Photos v1.6 adds Google Cast support for photos and custom people labels. There's still no sign of shared albums, but that's probably a server-side switch.