Plain vanilla post folks, 'cause I don't have the time or means to make it as pretty as I usually would.

For those of you still holding out on FRF50, here's an update to the latest leaked ROM:

You can now update from FRF72 - see Update 3 below.

What a day! We were hoping for this but never expected it to actually happen - Andy Rubin, VP of engineering at Google and one of the main guys behind Android, just announced that the Froyo source is going to be available today:

1:41PM Andy Rubin: "If you're a third party developer who's built an app for Android, you can talk to it from the cloud." Talking up Froyo -- it's being open-sourced as of today.

Good thing for our readers that I’m a night owl, and I happen to love my Nexus One, and love me some frozen yogurt. Especially together: 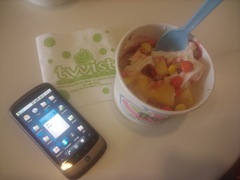 And now I have my T-Mobile Nexus One updated with the latest and greatest FRF72 build.

I just happened to be browsing a forum about the upcoming official Android 2.2 Froyo release when I see someone leak a URL for the FRF72 build that Google Employees were given a week ago. 1) The phone sold out nearly everywhere, right away. Personally, I went to 3 stores and called 2 more to try to find one on launch day, without luck. I managed to order one from Sprint, but within 2 days of launch they were reporting being sold out online as well.

Our friends over at Engadget have published a kick ass guide on how to take advantage of Froyo’s cloud to device messenger capability. You may recall the demonstration during the Android keynote at Google I/O, where they pushed directions to their phone from Google Maps with the click of a button. Well, someone hacked together a quick app and accompanying Chrome and Firefox extensions that will allow you to do the same.

I went to Android Office Hours where everyone had a chance to ask core developers anything they wanted (I managed to grab 2 Android dev books there too - awesome!).

Big thanks to the folks over at this XDA thread that discovered the URL!

Disclaimer! We are not responsible for any harm that may occur due to your flashing or attempting to flash this rom