Modern routers can do some cool things, especially if you're using the new Google WiFi mesh routers. They can cover your home in a healthy glow of electromagnetic waves, intelligently connect to devices, and keep track of your data usage. However, linking Google WiFi with an OnHub can result in some weird data usage stats. Google now says it's aware of the issue and is working on a fix. I'm reviewing Google Wifi because my apartment sucks. Well, specifically: my apartment's walls suck. And the placement of my router is far from ideal. You see, because I need a hardline to my desktop PC in my office, that means keeping the router in the office, too, or snaking around fifty feet of unsightly ethernet from my living room along the wall (in-wall cabling is not an option for me). This presents a conundrum, because it means that if I want my apartment to have well-distributed Wi-Fi, I need a big, ugly, long cable running the length of the place. If I don't want to run the cable, it means lopsided Wi-Fi coverage. 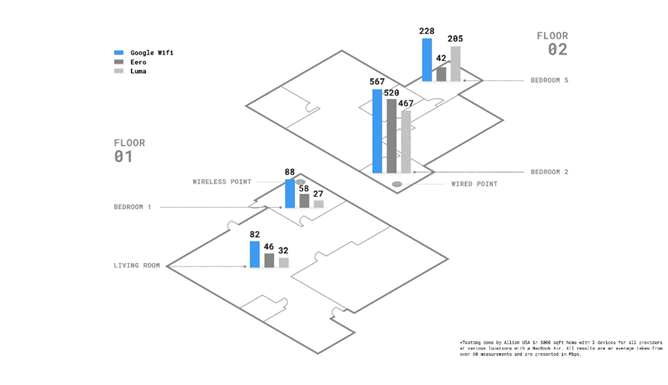 Google told us at its event in October that the company's new router, the Wifi, would be available to order some time in November and would then ship in December. Right on cue, an unlisted video has appeared showing how to set up your brand new router.

Setup is reasonably straightforward, from the looks of things: plug in the USB-C cable for power and ethernet to your existing modem, then wait for it to flash blue, at which point the app can be used to configure it. To do this, scan the QR code on the bottom of the router, then wait for the app to do its thing. Google only gave OnHub a passing mention at today's event before announcing Google Wifi. For some reason, the presenter didn't feel it important to mention that those of you who spent $200 on the OnHub last year are not being left out of all the cool new WiFi stuff. Yes, OnHub will be compatible with Google Wifi. How's your OnHub doing? Still pretty much the same as it was a year ago? Yeah, me too. Google never pushed many updates to the OnHub, which was supposed to be a hub of home automation. Hell, the USB port still doesn't work. The OnHub isn't dead, but Google is clearly moving on with the announcement of Google Wifi. This networking solution takes more of a mesh approach to cover your home, rather than using a single unit with a bunch of fancy antennas.